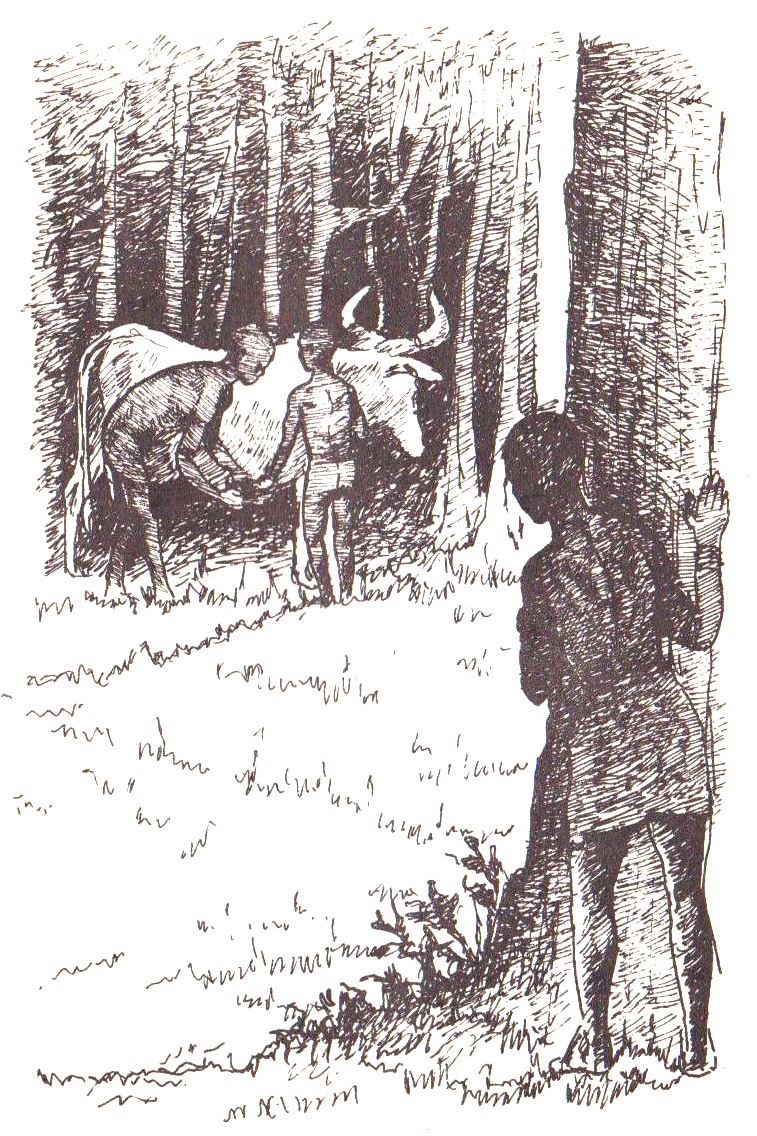 Once upon a time there was a man who had two wives. One day, his first wife became ill. She called her two children and said to them, "My dear children. Soon I will die. Now kiss me, and say goodbye."

Her children were very sad.

"Mother," they said. "Our father's second wife hates us. If she doesn't give us food, what shall we do?"

"Don't worry," their mother said. "When you're hungry, go into the forest. You'll find someone to feed you there."

The mother died, and the two boys cried for many days. Then they went to their father's second wife.

"What?" said their stepmother. "You want me to give you food? I don't have enough for my children. Go away. I haven't got anything for you."

The younger brother began to cry.

"I'm hungry," he said to his older brother. "I want something to eat."

His older brother took his hand.

"Don't worry," he said. "Remember what our mother said. We'll go into the forest and find someone to feed us there."

So the two children went into the forest, and there they found a cow. The cow was very kind to them. Every day she gave them food to eat. The children were happy. They were never hungry now.

The children of the second wife could not understand it.

"Who feeds you?" they asked their brothers. "Why are you never hungry? And why do you go to the forest every day?"

One morning, the oldest girl said, "I'm coming with you to the forest today. I want to know where you find your food."

Her two stepbrothers tried to stop her.

"No, don't come," they said. "You'll be tired and hungry. We don't do anything in the forest. We have no mother to give us food, so we just walk all day until we're tired."

But their sister asked them again and again, so at last they agreed to take her.

They walked about in the forest all day, until they came to the home of the cow. The older boy didn't want to tell his stepsister about the cow. He wanted to keep the secret. But his little brother was very hungry, and he said, "Please, I'll die if I don't have some food. Call the cow and let's eat."

So they called the cow and she came and gave food to the brothers, and they ate it.

When they got home, the children's stepsister said to her mother, "I know my brothers' secret. There's a cow in the forest who gives them food every day."

The next day, the woman went to her husband.

"Husband," she said. "You know that I'm pregnant and our new baby will soon be born. I need to eat very good food. If I don't eat well, the baby won't be strong. Bring me the cow from the forest."

"I know your secret," she said. "I want the cow that feeds your children."

So her husband brought the cow from the forest and gave it to his wife.

Her husband tried to argue with her but she didn't listen to him. At last, he agreed to kill the cow. He picked up his knife and cut the cow's throat, but the cow refused to die.

Then his wife said, "If the cow doesn't die, I will kill your two children."

When the children heard this, they said, "Let the cow die," and she died.

The woman tried to skin the cow, but the skin refused to come off the meat.

"If this skin doesn't come off the dead cow," the woman said, "I will kill the children."

When the children heard this, they said, "Let the skin come off," and the skin came off the dead cow.

"If the meat doesn't cook, I will kill the children," said the woman.

When the children heard this, they said, "Let the meat cook," and the meat began to cook.

When the meat was cooked, the woman tried to take the pot off the fire, but the pot didn't move.

"If the pot doesn't come off the fire, I will kill the children," said the woman.

Then the woman took the meat out of the pot, and ate it.

The two brothers were worried now.

"Our stepmother has killed our cow and now she wants to kill us," they said. "We must run away." 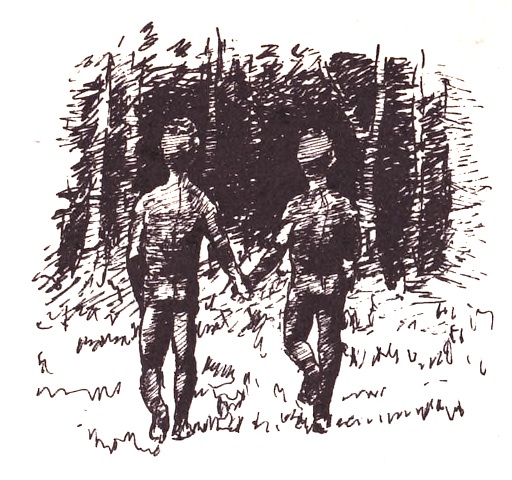 One day, as the older brother was walking near a village, he saw a girl, and he fell in love with her. She was the daughter of the chief. The chief had many daughters, but this one was the most beautiful of them all.

The young man began to meet the girl secretly, and she fell in love with him, too.

One day, the chief said to his men, "Who is the stranger who comes every night and fights beside me? I want to meet him."

"Ask your daughters," his men said. "They will know."

So the chief told everyone to come to a meeting. When they were all together, he called his daughters and said to them, "Bring your husbands and your lovers here, so that I can see them all."

So all the chief's daughters came with their husbands and their lovers. But the young man from the forest, who loved the chief's most beautiful daughter, had smallpox and he was very ill. He sat far away from the others and did not look up at the chief.

The chief's beautiful daughter ran up to him and took his hand.

"What are you doing?" said the chief. "Come away from that man. He has smallpox."

"But father," said the girl, "this is the man who fights beside you every night. He is brave and strong. I love him and I want to marry him."

The chief was angry when he heard this. He didn't want his daughter to marry a man with smallpox. He began to shout at her. Then he stopped. Everyone was looking at him.

"What's the matter?" asked the chief. "Why are you all looking at me?"

"Your - your head, sir," the people said. "Look! It's growing! It's getting bigger and bigger!"

The chief put his hands up to his head. It was true. His head was growing bigger and bigger.

"Please, father," his daughter said, "please let me marry this man. If you don't let me marry him, your head will grow and grow. If you do, it will become the right size again."

Everyone said, "Yes, sir, let her marry the young man. Do what she says."

So the chief agreed to the marriage. At once his head stopped growing and became the right size again.

Then the young man and the chief's daughter were married, and they lived happily ever after.

Exercises for The Magic Cow