The Song from the Tree

This story is about a man with a broken leg. He limped. 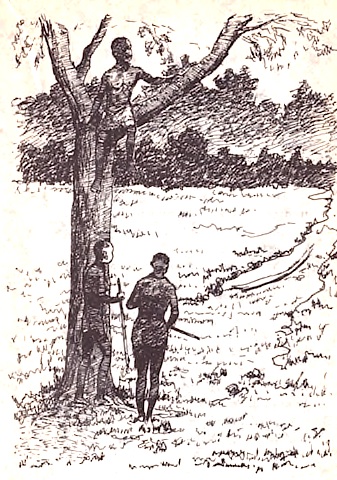 Once there was a woman who had three daughters. For many years she lived happily with her husband and children, but then, one day, her husband died. The woman was very sad. She didn't like living alone.

After a few years, the woman met another man. He was a good, kind man, whose name was Shigosh. Shigosh couldn't walk easily because he had a broken thigh. He limped. But the woman loved Shigosh. She wanted to marry him.

The woman's daughters didn't like Shigosh. They laughed at him because he limped. They were rude and angry, and their mother was afraid of them.

"My daughters don't want a new father," she said to Shigosh. "They'll never let me marry you. We must meet each other secretly."

Outside the woman's village, there was a big tree. Every day, the woman went to the tree and hid among the leaves. Then she sang,

"Shigosh, Shigosh,
Here in the tree,
Your wife is waiting.
Come to me!"

When Shigosh heard her, he began to sing too, as he limped quickly to the tree.

The woman heard his song, and she smiled.

"Shigosh sings like he walks," she thought. "His song goes with a limp."

She loved Shigosh. She even loved his broken thigh. She was happy with him, in their hiding place under the tree.

One day, the woman's oldest daughter heard about her mother's lover. She ran to tell her sisters.

"Our mother loves Shigosh," the oldest daughter says. "She meets him secretly under the big tree near the village."

"What?" said the second girl. "She loves that stupid old man who can't even walk? The man who limps?"

"We don't want him to take our father's place," said the youngest. "Come on, sisters. We must make a plan."

So the three sisters decided to catch Shigosh. They took some bark from a tree and put it in water. The bark became very slippery. Then they took the slippery bark out of the water and put it on the path near the big tree.

"Your voice is like our mother's voice," the two oldest daughters said to the youngest. "You can sing like her. Climb up into the tree and sing her stupid love song. That old man will come running to find her. He'll slip on the bark and fall. Then we'll kill him."

So the youngest daughter climbed into the big tree and began to sing,

"Shigosh, Shigosh,
Here in the tree,
Your wife is waiting.
Come to me!"

Shigosh heard her singing. At once he began to limp to the tree. He sang,

"My wife, yes! Waiting for me.

But he never finished his song. His feet slipped on the slippery bark and he fell down. At once, the three sisters ran up to him. They hit him with their sticks and killed him. They hid his body under the leaves of the big tree.

Then the daughters ran across the river and hid in another tree near the river bank.

"Mother!" they called. "Go to your lover. He's waiting for you!"

The woman was worried when she heard this.

"Oh!" she thought. "My daughters know about Shigosh.  What will they do?"

Quickly, she ran to the meeting place, but Shigosh wasn't there. Then the woman heard the noise of flies. She looked under the leaves and found Shigosh's body.

The woman was very sad, and very angry with her wicked daughters. She looked up, and saw the girls hiding across the river. She crossed the river, and stood beneath the tree where they were hiding. She looked up. She could see her oldest daughter's legs between the branches. She called out,

"My oldest child,
Up there in the tree.
I carried you in my womb.
Come down to me!"

But the oldest girl said, "No, Mother, I won't come down."

The woman looked up again. She could see her second daughter's arms round the branches, and she called out,

"My second daughter,
Up there in the tree.
Your blood is my blood.
Come down to me!"

But the second girl said, "No, Mother, I won't come down."

The woman looked up again. She could see her youngest daughter's face through the leaves.

"My youngest daughter,
Up there in the tree.
I love you best.
Come down to me!"

But the youngest girl said, "No, Mother, I won't come down."

Then the mother was very, very angry, and she picked up an axe and started to cut down the tree. The tree fell across the river and made a bridge. The first and second daughters ran across the bridge, away from their mother. But the tree fell on top of the youngest daughter and broke the bone in her thigh. The girl's leg never got better, and from that day she could not walk easily. She limped.

"Look at her," everyone said. "She and her sisters were cruel to a man because he limped. They laughed at him, and then they killed him. Now God wants her to suffer too."

Exercises for The Song from the Tree