The People of the Sea 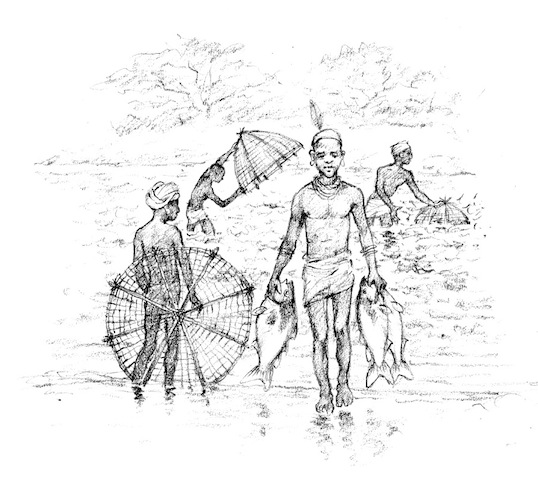 In the old days, people were good hunters and good fishermen. They understood the animals and the fish. They knew about the trees and plants.

People used to go to the river and collect fruit from the birabira tree. They put the fruit in the river. The fruit confused the fish. The fish came up out of the deep water, and the people could catch them easily.

One day, many people were near the river. They were putting birabira fruit into the water. They were waiting to catch the fish.

The water was rising faster and faster. It was coming up, over the edge of the river. The people were frightened. They wanted to run away. The river was not a river now. It was a great sea.

Then, in front of their eyes, the water divided into two. There was water to the left, and water to the right. But in the middle was a path.

Now the people changed. Some of them became elephants. Some became crocodiles. And some of them grew long tails. They were monkeys.

The animals stayed in the water. They built houses there. And they live there still, under the sea.

Exercises for The People of the Sea