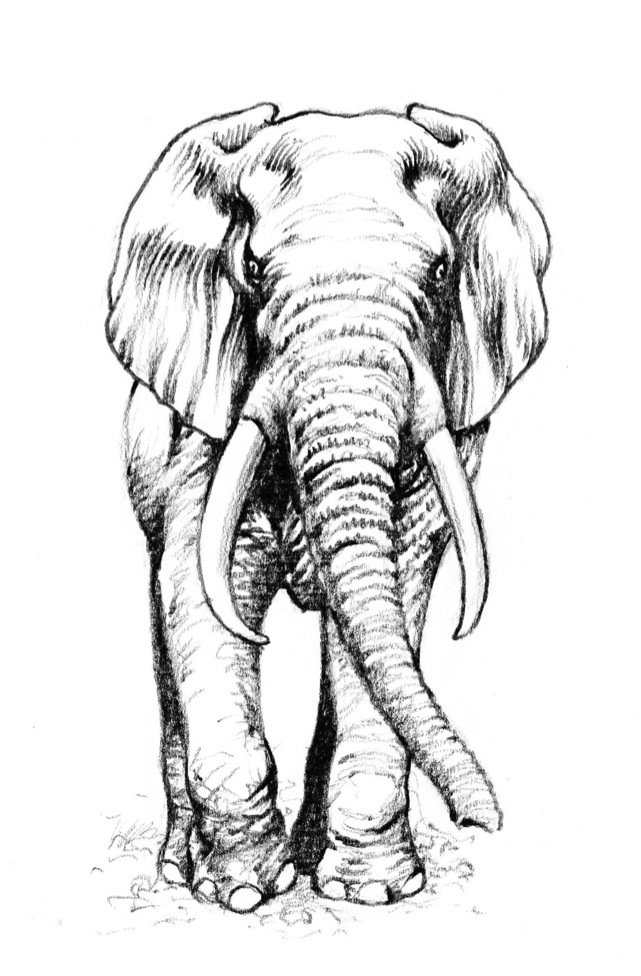 A long time ago, some hunters were walking along the road to Sudan. Suddenly, they met an elephant. An old hunter talked to the younger ones.

"Look," he said. "The elephant is going to the river. We must kill him before he goes into the water. After an elephant drinks water, the bullets cannot enter him."

So the hunters took their rifles, and they killed the elephant on the road. They cut up the meat and took it to their hut. Then they sliced the meat and hung it on ropes to dry.

They cut all the meat from the elephant's head. Now, only the skull was left. The hunters hung the dry skull on the wall of their hut.

The men feasted on the elephant meat. It tasted good. They began talking about the hunt.

"We are good hunters," they said. "The elephant was big, but he was foolish. He was bigger and stronger than us. Why didn't he run away from us? We were too clever for him!"

And the men began to laugh at the elephant.

One of the men heard something strange. He put up his hand.

"Did you hear that noise, my brothers?" he said.

"What noise?" said his friends.

"Someone was laughing," the man said.

"All of us were laughing!" said the others, and they began to laugh again.

The strange noise came again. Now all the men could hear it. They stopped laughing, and looked at the elephant's skull.

"The elephant is laughing," they said.

Then the elephant's skull spoke.

"Are you laughing at me?" it said.

The oldest hunter looked at his friends.

"What kind of animal did we kill today?" he said. "It is dead, but it speaks to us. Take the skull outside. Don't leave the bones of this animal inside our house."

So the hunters carried the elephant's skull outside the house. But on the way, the skull began to sing:

"You laughed at me, you hunters!
I heard the words you said.
You are my killers, but who is alive?
You killed me, but who is dead?
You ate my meat, you stole my tusks,
You took my eyes, and I am blind,
But one day, I will eat you.
One day, you will be mine!"

Exercises for The Elephant's Head