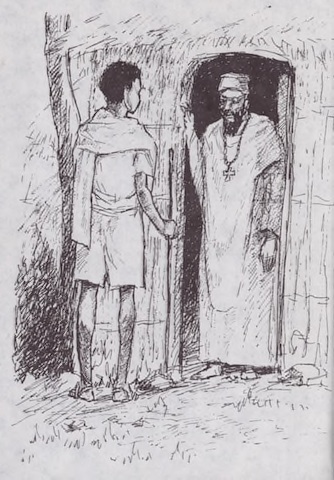 A young man lived with his father and mother.

"Son," the old man said to the young man one day. "You are our only child. You must marry and have children."

So the old man found a wife for his son. She was a fine young woman, and her young husband loved her. A year passed, and she gave birth to a little boy.

"Father," the young man said to his father one day. "This little farm is too small for our family. Let me go and find work in the town. I will earn some money and bring it home to you."

The father was sad.

"You are my only child," he said, "and we need you here at home. But you are right. The farm is too small for us all. Go to the town. Find work and earn some money. We will wait for you here at home."

So the young man kissed his son and said goodbye to his parents and his wife. He began the long journey to the town.

He travelled for two days and at last he came to the town. He stopped at the first big house and knocked on the door. A man opened it.

"Is there work for me here?" the young man asked.

The young man walked on. He went to many houses and knocked on many doors.

His question was always the same.

"Do you have work for me here?" he said.

The answer was always the same, too.

The young man was tired now, and very hungry.

At last he came to a monastery. He knocked on the door and an old monk opened it.

"Please, Father," the young man said, "let me work for you."

"How long will you stay?" the monk asked.

"For a few months only," answered the young man. "Then I must go back to my family."

The monk began to shut the door.

"Father," he said. "Please don't close the door. I promise to work for you for a long, long time."

The monk smiled at him.

The next day, the young man began to work. The work was not difficult. The monks were kind to him. The young man worked hard for them and they were pleased with him.

A month past. At first, the young man thought about his family every day.

"Is my son well?" he thought. "Are my parents happy? Does my wife have enough food to eat?"

But slowly, the young man forgot his family. He was happy with the monks.

"You are an honest man," they said to him. "You can look after our money for us. We will trust you."

One day, the young man was sitting on his chair in the monastery. He was counting the monks’ money. Suddenly, he heard voices. Children were laughing outside.

The young man looked up.

He stood up and looked out of the window.

"How old is my son now?" he thought. "How long have I been here? Five years? Six years? No, ten years! I've been here for ten years!"

The next morning, the young man went to see the monks.

"I've stayed with you for ten years," he said. "And I've been a good servant.  I've worked hard for you, but you have never paid me. Now I want to see my family. Please give me the money you owe me, and let me go."

The monks smiled at him.

"We owe you four hundred silver dollars," the monks said. "But each blessing costs a hundred dollars."

The young man looked unhappy, but at last he said, "Give me your blessing. It is better than the money."

So the first monk blessed him.

"Do not leave the road," he said. "Do not go to the right or the left. Only go straight on."

The second monk blessed him.

"Soon you will be a guest," he said. "Obey your host. Take what he gives you."

Then the third monk blessed him.

"Do not be angry," he said. "Always think before you act." 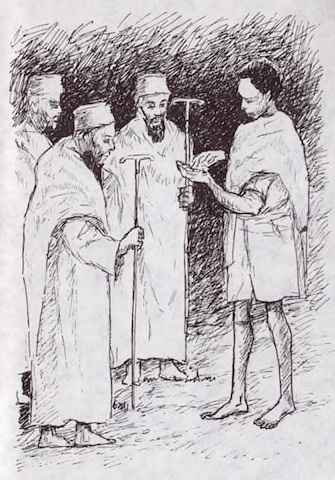 Soon, he met two men. They were walking along the road together.

"Walk with us," they said. "We'll talk together and our journey will be more interesting."

The young man agreed, and the three men walked on together.

Soon they came to a crossroads.

"Follow me," one of the men said. "I'll show you a better path," and he turned to the left and began to walk along a different way.

The other man followed him, but the young man remembered the first monk’s blessing.

"Do not go to the left or the right," the first monk had said. "Only go straight on."

The young man smiled at his new friends.

He said goodbye to the two men and went on down the road. He crossed the river and walked up the next hill.

Suddenly he heard shouts. He looked back across the river. He could see the two men. They were shouting for help. Robbers were attacking them. He wanted to go back and help his friends, but there were many robbers and they were big and strong.

"If I go down there, they'll kill me," he thought.

He was grateful to the monks.

"The first blessing saved my life. It saved me from the robbers," he thought.

He went on down the road. He walked for a long time. He was hungry and thirsty now, and he was tired too.

"It will soon be dark," he thought. "I must find a place to sleep."

He looked round. He was in a wild place. There were no houses here. He was frightened of hyenas and leopards. He began to walk faster.

It was dark now.

"I must find a place to sleep," the young man thought.

At last, he saw a light in the distance. He ran towards it.

The light came from a little house on a hill. The young man ran up to it and knocked on the door. At once an old man opened it. He had white hair and he wore fine, white clothes.

"You are welcome. Come in," the old man said.

The young man followed him into the house.

"Sit down," said the old man. "Wait here. I will fetch some water and wash your feet."

"I can't let this noble old man wash my feet," he thought.

The old man went away to fetch the water. Soon he came back. The young man wanted to take the water out of his hands. He wanted to wash the old man's feet. But then he remembered the monk’s second blessing.

"Obey your host," the second monk had said. "Take what he gives you."

So the young man sat down, and the old man washed his feet. 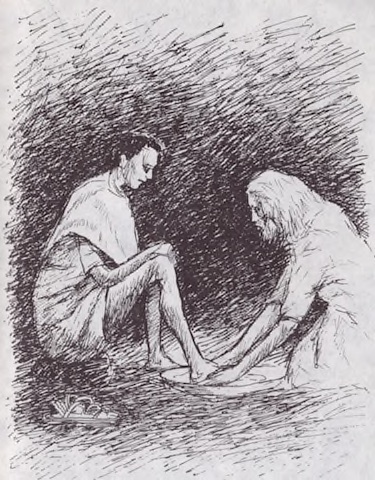 Then the old man clapped his hands and a young girl came into the room. She was carrying a dish of delicious food.

"Feed our guest," the old man said to the girl.

The girl did not move, and the young man saw that she was blind.

The old man pushed her towards the young man.

So the girl fed the young man, and he ate well. Then he lay down to rest, and he slept all night.

He woke up early in the morning.

The sun was up now and the young man could see his host clearly. The old man did not look fine and noble now. His teeth were long and white and sharp. His eyes were small and cruel.

"Is he a man or is he an ogre?" the young man thought.

"You're lucky," the old man said. "You didn't refuse my hospitality. I wanted to wash your feet, and you accepted. I gave you food, and you ate it. Many people have come to my house. They didn't let me wash their feet, and they didn't accept my food. I killed them all."

He pointed to the ground.

"Their bodies are under your feet," he said.

The young man was very frightened.

"I must go," the young man thought. "I must get away from this terrible man. He is mad!"

"Thank you, goodbye, thank you, God bless you," he said quickly, and he began to walk away.

But the old man called him back.

He went back into his house, and came out again. He was carrying a sack.

The young man took the sack, and ran away down the road. The sack was very heavy. At last he stopped under a tree and opened it.

He tried to count them but he couldn't. There were too many of them.

"The monks saved my life again," he thought. "And their second blessing has made me rich, too."

He went on quickly down the road.

"My dear parents and my wife will be very happy," he thought. "I can look after them well now."

He walked for a long time. The sun was high in the sky and he was hot and tired. But he knew this road well. He knew the trees and the rocks and the little streams. He was nearly home.

He came to a church by the side of the road. A crowd was standing there. They were watching an old man and a boy. The man and the boy were fighting.

"What a wicked boy!" he thought. "He is showing no respect to that poor old man."

He wanted to run up to the boy and beat him with his stick. But then he remembered the monks’ third blessing.

"Do not be angry," they had said. "Always think before you act."

He turned to the woman next to him.

"What's happening?" he said. "Who is this old man and this boy? Why are they fighting?"

"It's a sad story," the woman said. "These people are very poor. The old man is the boy's grandfather. Ten years ago his son left him because he wanted to find work in the town. The old man had no one to help him. He has been very unhappy. He wanted to kill himself. His grandson is trying to stop him."

"Oh my father! Oh my child!" he shouted.

He pushed his way through the crowd. He took the young boy's arm and looked into his eyes.

The old man had fallen to the ground. The young man helped him to stand again.

The old man looked at him.

"Is it really you?" he said. "Have you really come home again?"

The young man went to his house with his father and his son. His mother and his wife kissed him, but then they began to cry.

"You have come home only to die," they said. "We have no food here. We ate our last meal yesterday."

The young man opened his sack and showed them the silver dollars. Then he added to it the hundred dollars that the monks had given him

"I haven't come home to die, but to live!" he said. "The monks have blessed me and we will be happy now for the rest of our lives."

Exercises for The Monks' Blessing