The Cat and the Woman 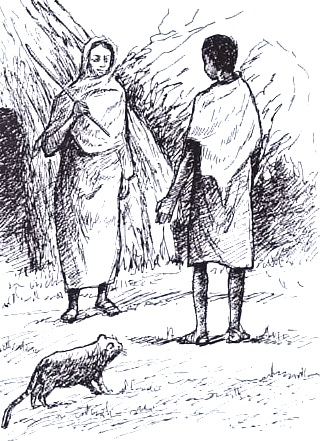 At the beginning of the world, the cat was the friend of the antelope. They lived together and played together. But one day, a hungry lion killed the antelope.

"The lion is the strongest animal," thought the cat. "I'll be the lion's friend."

So the cat became the friend of the lion. They hunted together and ate together.

One day, a herd of big elephants came to the forest. The lion tried to kill one of their little ones. The elephants were very angry. The biggest of them killed the lion.

"The elephant is stronger than the lion," thought the cat. "I'll be the elephant's friend."

So the cat became the friend of the elephant. They walked together through the forest.

There was a village near the forest and the people there were hungry. One day, a brave man hunted the elephant and killed him.

"The man is stronger than the elephant," thought the cat. "I'll be the man's friend."

She followed the man for many days. At last, he returned to his hut and she went with him.

Now the man had a wife, and the wife was angry with her husband.

"Where have you been?" she shouted at him. "You didn't come home for days and days!"

And she ran after her husband with a big stick.

But his wife didn't listen. She began to beat her husband with the stick. He ran away.

"Hmm," said the cat. "The woman is stronger than the man. I'll be the woman's friend."

She went into the hut, and lay down beside the fire. And she became the woman's friend for evermore.

Exercises for The Cat and the Woman