Part Three: Fatuma and the Bird 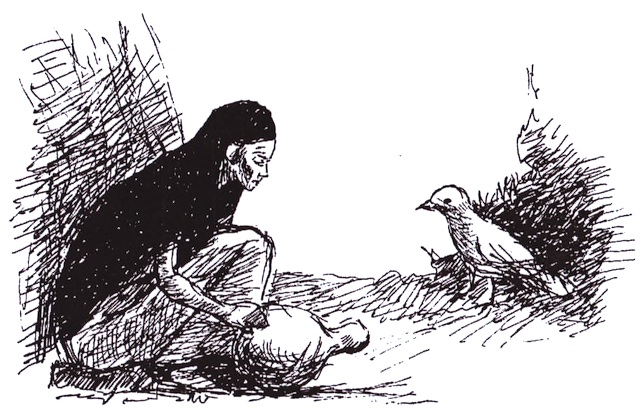 Suddenly, she heard a noise. She looked up. A little bird was sitting on a branch beside her.

"Please, girl," said the bird. "My wing is broken and I'm very hungry. Give me a date from your tree.

"Yes, little bird," said Fatuma. "I will give you a date from my tree. But then, please, do something for me."

"Fly to my village," said Fatuma. "Take a message to my father and mother.""What is your message?" asked the bird.

"My wing is broken," answered the bird, "but I'm sorry for you, dear Fatuma. I will fly to your father and mother and give them your message."

So Fatuma gave the bird a date. He ate it, and rested. Soon, he felt stronger. He flew away to Fatuma's village.

Fatuma's mother was making butter. She was shaking the milk in her butter churn. The bird sat on the roof of her house and called to her.

"Woman, what are you doing? Why are you shaking your butter churn? Your daughter, Fatuma, needs your help. Can't you hear her crying?"

"What?" said Fatuma's mother. "You stupid bird, what do you mean?"

"Your daughter is on the old dead tree in the lake," the bird told her. "She's calling out to you,

"I don't believe you. It's impossible," said Fatuma's mother, and she went on churning butter.

The bird was angry. He sang,

"I'm a poor little bird with only one wing,
I can't fly fast, but I can sing!
Wicked woman, leave your butter.
Go to the lake, and help your daughter!"

But Fatuma's mother did not listen to the bird.

Then the bird went to Fatuma's father. He was sewing a pair of shoes.

The bird sat down on the branch of a tree and called to him, "Old man, what are you doing? Why are you sewing shoes? Your daughter, Fatuma, needs your help. Can't you hear her crying?"

"What?" said Fatuma's father. "You stupid bird, what do you mean?"

"Your daughter is on the old dead tree in the lake," the bird told her. "She's calling out to you,

But Fatuma's father did not listen to the bird.

"I don't believe you. It's impossible," he said, and he went on sewing shoes.

The bird was angry. He sang,

"I'm a poor little bird with only one wing,
I can't fly fast, but I can sing!
Wicked father, don't refuse
To help your daugher. Leave your shoes!'"

But Fatuma's father did not listen to the bird.

So Fatuma stayed in the tree, and the little bird brought food to her every day.

Now one day, a prince was passing by. His shepherd went in front of him. He was looking for good grass for the prince's cows and sheep. 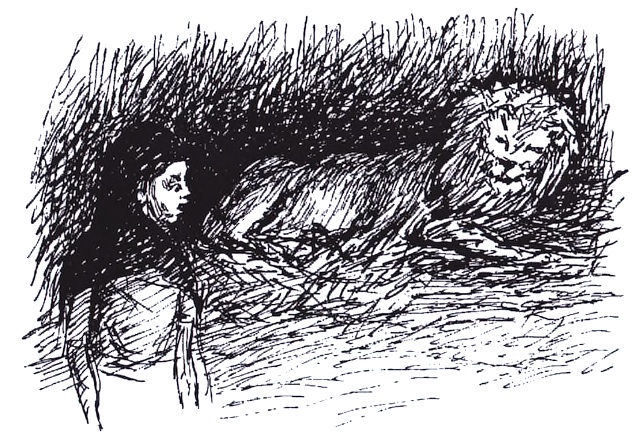 The shepherd was deaf and dumb. He could not hear and he could not speak. He came to the edge of the lake, and he looked up, and saw Fatuma in the tree.

The prince rode near the lake on his horse. The shepherd ran up to him.

"What is it, shepherd? What do you want?" asked the prince.

The shepherd could not say. He took the bridle of the prince's horse and began to lead him to the lake. They stopped at the water's edge. The prince looked up and saw Fatuma. At once, he fell in love with her.

"Beautiful girl, how did you climb this tree?" he called up to her. "Let me come up to you! I want to marry you!"

"Wait," said Fatuma. "First I must test you. I will spit. If my spit reaches you, and if it changes to gold, I will marry you."

So Fatuma spat at the prince, and her spit reached him, and changed to gold.

Then Fatuma climbed down from the tree, and she married the prince, and she went to live with him in his palace.

The years passed, and Fatuma's mother and father became very poor. Now they had no cows and camels, no sheep and goats. They were hungry. They had nothing to eat.

"We must go to the prince's palace," they said, "and beg for food."

So they went to the palace.

"Help us, for God's sake!" they cried. "We are dying of hunger! Give us something to eat!"

"Is that my father? Can it be my mother?" she thought.

She went out to see them. At once, she recognised them.

"Give these people food," she said to her servants. "Give them clothes and shoes."

So Fatuma saved her parents, and she lived happily with her prince for the rest of her life.

Exercises for Part Three: Fatuma and the Bird

Listen to the whole story: