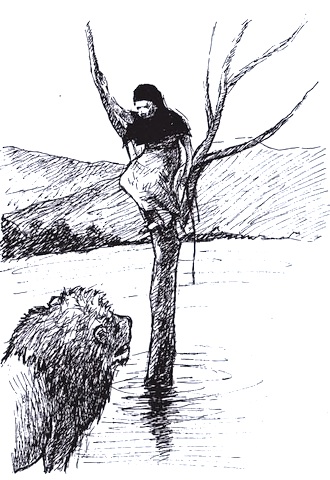 Everyone in the village was preparing to move. They were packing their huts and loading their camels.

The lion went to Fatuma's father.

"We must leave you now," he said. "We will not come with you. I want to take my wife to my relatives."

The family all agreed.

"That's good. That's right," they said. "You must take her to your own family."

So Fatuma and the lion left the village. They began to travel alone.

"I will lead it," Fatuma answered. "If you are tired, you can ride."

So the lion climbed up on to the camel and they began their journey. But the lion was hungry. He bit the camel's hump and ate a piece of it.

"What's the matter with the camel?" she said.

"He doesn't like your black scarf," said the lion. "It frightens him. Take it off and throw it away."

So Fatuma took off her scarf and threw it away.

They went on a little further, but the lion was still hungry. He bit the camel's hump again.

"Your bracelets and your necklace are making a noise," answered the lion. "The camel doesn't like it. Take them off and throw them away."

So Fatuma took off her bracelets and her necklace and threw them away.

They went on quietly for a while, but then the lion bit the camel's hump again.

"Now what is it?" asked Fatuma.

"He doesn't like your dress," said the lion. "Take it off and throw it away."

So Fatuma took off her dress and threw it away. Now she was like the animals. She had no clothes on at all.

At last, they came to a wild, empty place. There was no village here, no people and no cattle.

"This place is good," said the lion. "We will stop here."

So Fatuma unpacked the camel and put up her hut.

The lion went away. Now Fatuma was alone.

"My husband is not a man," she thought. "He is a wild animal, and his friends and relatives are animals too. Perhaps he will bring them back here with him, and they will eat me. What can I do? I can't go back to my family. They will not believe me, and they will be ashamed. No, I must run away."

She took out a knife and cut off her little finger. She put it in the mortar. Then she went out of her hut and began to run.

At last, she came to a big lake. There was a tree in the middle of the lake. It was dead, but its branches were still strong.

"I will be safe in that tree," thought Fatuma, "but how can I climb it?"

She looked everywhere on the ground. At last, she found a rope. She picked the rope up, and with its help she crossed the water and climbed the tree.

The lion called all his friends, the leopard, the snake, the hyena, the baboon and the rat. They came with him to his house. But the hut was empty. The door was shut.

No one answered. No one was there.

The lion was very angry. He broke the door of the hut and ran inside.

Fatuma's little finger was in the mortar.

"Fatuma is not here! She has ran away!" the little finger shouted.

The lion pushed the mortar over. Then he picked the finger up, and ate it.

"Where is she? Where is my wife?" he roared.

The snake, the leopard, the hyena and the baboon shook their heads.

But the rat looked up at the lion and said, "I saw a girl. Perhaps she was your wife. She was running to the lake. She was climbing the big dead tree."

So the rat ran to the lake and all the animals followed him. They stood at the edge of the water and looked up into the tree.

The lion was very, very angry. He was ashamed in front of all his friends.

"You, wife! Come down from that tree!" he roared.

The lion changed his voice. He tried to make it kind and loving.

"Dear wife, dear Fatuma," he said. "Please come down. My friends want to greet you."

Fatuma looked at the lion. His voice was soft now, but his eyes were wild.

"How can we do that?" said the lion. "How can we cross the water and climb the tree?"

"I have a rope," said Fatuma. "I will throw one end down. Hold the rope, and I will pull you up. Now, who will come first?"

So the lion took the rope and Fatuma began to pull it. She pulled and she pulled. Now the lion was half way up the tree.

Then Fatuma took out her knife, and cut the rope. The lion fell, with a big splash, into the water. He died at once.

"Who wants to come up now?" said Fatuma.

The other animals looked at each other.

"She is our sister-in-law, the wife of our brother," they said. "She will not cut the rope for us."

They took the rope and Fatuma began to pull it. She pulled and she pulled. Now all the animals were half way up the tree.

Then Fatuma took her knife and cut the rope again. All the animals fell, with a splash, into the water. They all died.

"I am alone again," thought Fatuma. "I am safe, but there is no one to help me."

She began to cry.