Deya Ali and the Thieves 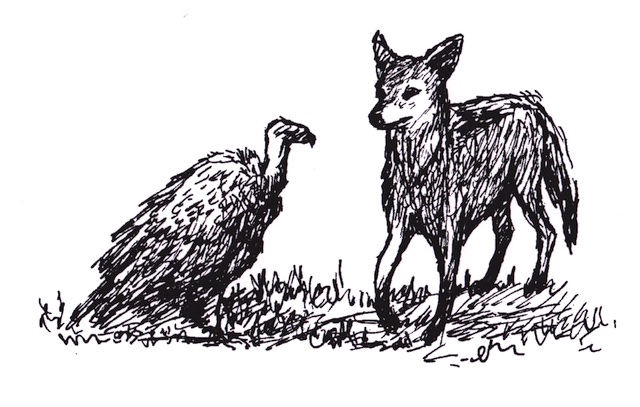 Deya Ali the fox lived with her uncle, the lion. With them lived a group of friends, the hyena, the bag of coffee husks, the forked stick, the butter gourd and the sack of barley chaff.

But Deya Ali was jealous of all her friends.

"There are too many of us here," she thought. "We have to share everything. There is never enough for me."

One day, Deya Ali said to the lion, "Uncle, let me take the cows and the goats out tomorrow, and let the hyena come with me."

"All right," said the lion.

So the next day, Deya Ali and the hyena took the cattle out together.

When it was nearly evening, Deya Ali said to the hyena, "I'm very hungry. I must eat something soon."

"Oh, we can't do that," said Deya Ali. "The lion will beat us. Look, over there, near the river, I can see some men. They have some nice, fat cows. Why don't you kill one of them for us?"

So the hyena ran down to the river, and tried to kill a cow. The men saw him and ran after him. The hyena was frightened, and he ran and ran, over the hills and far away.

"That's the end of him," thought Deya Ali. "Now the first one has gone."

She drove the cattle back to the village.

"Oh Uncle," she said to the lion. "I'm very tired. I have been looking after the cattle all day, alone. That stupid hyena ran after the men's cows. They chased him away. You won't see him again. And I was working, working, all day long."

The next day, the lion said to Deya Ali, "Who will help you today?"

Deya Ali thought for a moment.

"Send the vulture with me," she said.

So the next morning, Deya Ali and the vulture went out with all the cows and goats.

"Please, dear Vulture," said Deya Ali. "I'm so hungry. You stay and look after the cattle. I'll look for some food. If I find something good, I'll bring it back for you."

The vulture agreed, so Deya Ali ran away. All day she looked for food, and she found many good things to eat.

In the evening, when the sun was going down, she came back to the vulture.

"Deya Ali, did you bring something for me?" said the vulture. "I'm so hungry."

"Yes, here's something nice for you," said Deya Ali. "Open your mouth wide."

So the vulture opened her mouth and Deya Ali put a big stone inside it. The vulture tried to swallow the stone but it stuck in her throat. 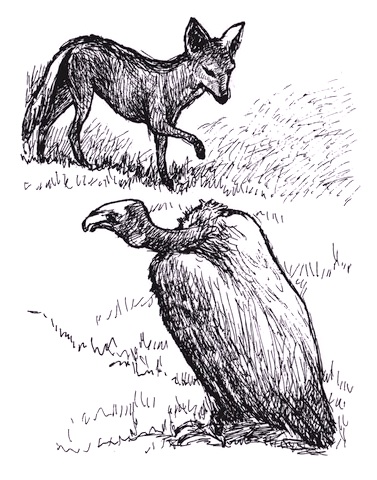 Deya Ali drove the cattle back to the village.

"Oh Uncle," she said. "I'm so tired. That stupid vulture went off early this morning to look for food. She has been eating all day. Her throat is full now and she can't even speak. All she can say is "Humu! Humu!". But I was working and working all day long."

"Is this true?" the lion roared to the vulture.

The lion was angry. He tried to beat the vulture. She flew up into the sky, and went over the hills and far away.

"That's the end of her," thought Deya Ali. "The second one has gone."

The next morning, Deya Ali said to the lion, "Let the forked stick come with me today. He can help me guard the cattle."

So the forked stick and Deya Ali went out together. They looked after the cattle all day. When the evening came, Deya Ali saw some farmers. They were cutting sticks to make a fence for their cattle.

"Look," she said to the forked stick. "There are your uncles, the sticks. Why don't you go and greet them?"

"All right," said the forked stick, and he went to greet his uncles.

The farmers picked him up at once. They broke him into two pieces, and tied the pieces to the fence. Now the forked stick could not move any more.

"That's the end of him," thought Deya Ali. "The third one has gone."

Deya Ali drove the cattle back to the village.

She said to the lion, "That stupid forked stick ran to greet his uncles. The farmers caught him, and broke him, and tied him to the fence. And I have been guarding the cattle alone all day."

The next morning, Deya Ali said to the lion, "Let the coffee husks come with me today. He can help me guard the cattle."

So the next day, Deya Ali and the coffee husks took the cattle out. In the afternoon, some travellers passed them on the road.

"Look at those people!" said Deya Ali. "They are very hot and thirsty. They need a drink. Coffee husks, can you help them?"

"All right," said the coffee husks, and he went up to the people.

So they boiled some water and roasted the coffee husks and put them in the water. And then they drank the coffee.

"That's the end of the coffee husks," thought Deya Ali. "The fourth one has gone."

She drove the cattle back to the village, and said to her uncle, the lion, "That stupid bag of coffee husks went to speak to some thirsty travellers. They made a drink with him, and drank him up. But I was working, guarding the cattle all day long."

The next morning, Deya Ali said to her uncle, "Let the butter go out with me today."

"All right," said the lion.

So the next morning, Deya Ali and the butter went out with the cattle together.

When the sun was high in the sky, Deya Ali said to the butter, "You are tired, butter. Sit on that stone and rest."

"Thank you, Deya Ali," said the butter, and she sat down on the stone.

But the stone was hot. At once, the butter melted and ran down, into the ground.

In the evening, Deya Ali took the cattle home.

"Oh, Uncle," she said, "that stupid butter sat on a hot stone. I have been looking after the cows alone all day long. I'm so tired and hungry."

The next day, the lion said to Deya Ali, "Take the barley chaff with you today."

So Deya Ali and the barley chaff took the cattle out together. They guarded the cattle all day.

In the evening, Deya Ali said to the barley chaff, "We are hot and dirty. Let's go to the river and bathe."

"All right," said the barley chaff.

So they went to the river and bathed. The chaff tried to swim, but the water carried him away, one little piece after another.

"That stupid barley chaff has gone," she said to the lion. "He tried to swim in the river."

"So who will go with you tomorrow?" asked the lion.

So the next day, Deya Ali and the lion went out together.

At midday, Deya Ali made a big hole in the ground. She put a fire inside it, then she covered it with a cowskin.

"Uncle, you are tired," she called out to the lion. "Come and rest."

The lion came and sat on the cowskin. At once it fell down. The lion fell into the hole and the fire burned him. Soon he was dead.

"I'm rich!" she shouted. "All the cows and goats and camels are mine!"

Not far away, some thieves were hiding in the bushes. They heard Deya Ali.

"Deya Ali, the fox, is alone now," they said to each other. "Nobody is helping her. Come, brothers, this is our chance!"

When it was dark, the thieves came out of the bushes. One tried to take a cow from one side. Another tried to take a goat from the other side. Deya Ali heard them. She began to run round the cattle very fast. She was shouting loudly in different voices.

The thieves ran back into the bushes.

"Deya Ali isn't alone," they said. "We heard many voices. Perhaps her family have come to help her."

Deya Ali was happy. She sat outside her hut and sang a song.

"The wicked thieves came
But they can't catch me!
I'm the wonderful,
Clever, Deya Ali!"

The next night, the thieves watched Deya Ali again.

"She's alone tonight," they said to each other. "Perhaps her family have gone."

Deya Ali took some empty gourds and tied them to her body. She began to run around. The gourds hit each other, and made a noise like this: chellalum, chellalam, chellalum!

The thieves looked at each other.

"Horses are coming!" they said.

Deya Ali called out, "Hey, Omer, your horse is too close. Move away! Idris! Ahmed! Don't go so fast! Your horse is touching mine!"

"That's only Deya Ali," they said. "Nobody is with her. She is alone. Come, brothers, the cows and goats and camels are ours!" 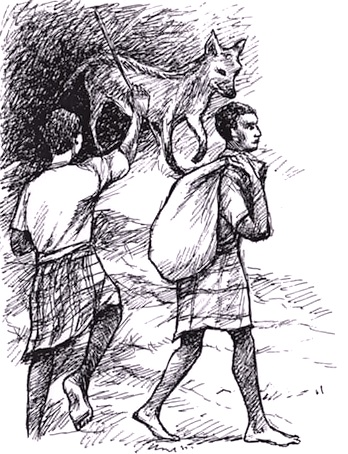 So the thieves ran up and took all the cows and goats and camels. And they beat Deya Ali and she began to cry.

"Oh Uncle, where are you now?" she said. "Oh my dear hyena, and vulture, and forked stick, and coffee husks, and butter, and barley chaff! I was foolish and wicked and I drove you all away. I made a terrible mistake. But I have learned my lesson now. It is good to have friends, and it is bad to be alone."

Exercises for Deya Ali and the Thieves