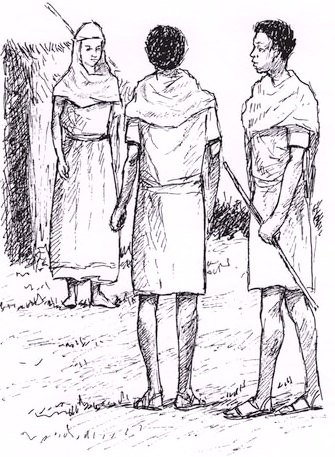 One day, a boy was walking near his village. He looked up, and saw a beautiful girl. She was looking after her father's goats. The boy fell in love with the girl at once. He wanted to marry her.

"You're the most beautiful girl in the world!" said the boy. "I want to marry you!"

The girl smiled at him.

"Then let's run away together," said the young man. "I'll come with my friend tomorrow and take you to my home."

They talked for a long time, and at last the girl agreed.

The next night, the young man came back to the girl's village. His friend was with him.

"Come, my beautiful one!" he called softly. "Run away with me!"

The girl heard him. She ran out of her village and found the young man and his friend. They laughed and smiled at each other. They were happy.

They walked all night. In the morning they were hungry.

The girl said, "Let's find something to put in our mouths."

"How can we do that?" the young man said. "There's no food here. You know that already."

But his friend smiled at the girl.

"She's not talking about food," he said. "She means, 'Let's find some twigs to brush our teeth with.'"

The girl smiled back at him.

They went on together. The sun was high in the sky now. It was midday, and they were all tired.

They all sat down under the trees. The girl and the young man's friend took off their shoes, but the young man didn't take off his shoes.

"I am resting," the young man answered.

"This boy is stupid," thought the girl. "How can he rest with his shoes on his feet?"

The young man's friend was looking at her.

"The young lady sees your shoes," he said to his friend. "Why are you still wearing them? If you want to rest, you must take them off."

The girl looked at him.

Soon they went on, and came to a village. The people were kind. They invited them to eat.

At the end of the meal, the girl said, "Some of the meat is still left. Let's get rid of it."

"What do you mean?" said the young man. "Look at the plate. It's empty. The meat is finished."

His friend was watching the girl. He stood up and went to a bush. He broke off a thorn and gave it to her.

"Some of the meat is stuck between our teeth," he said. "She wants us to get it out."

"You don't understand anything," said the girl. She was smiling at his friend.

The evening came at last. The three travellers arrived at the house of the sheikh. He was ready to marry the young man and the girl.

"Are you ready to marry?" the sheikh said to the girl.

"Do you want to marry this young man?" said the sheikh.

So the girl and the young man's friend were married. The poor young man shook his head.

"I made a mistake," he said. "I chose the wrong friend to come with me. If I take another bride from her father's house, I will choose my friend more carefully. I will make sure that he is poorer, less handsome and less clever than me!"

Exercises for The Bride's Test