A Story from Arsi

Talk with a friend about these problems 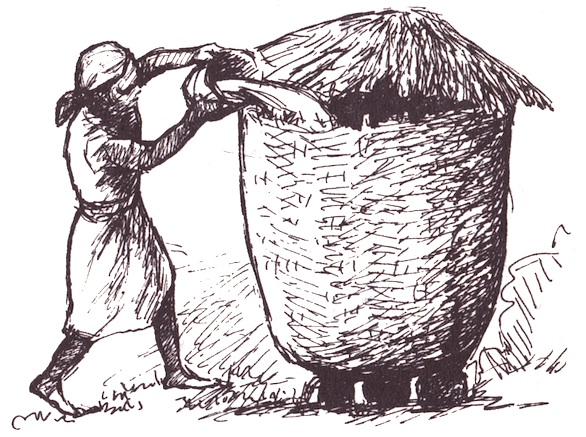 Once upon a time, a man and his wife had two daughters. The parents loved each other and they loved their children too. They were very happy.

Then one day, the woman died. The husband and his two daughters cried for a long time. They were very sad now.

After a while, the man thought, "I can't cook food for my children and fetch water from the river. I need a wife, and my children need a mother.""

He began to look for a wife, and soon he found one. She was a beautiful young woman, and the man fell in love with her.

"Please marry me," he said. "Be my wife, and a mother to my children."

"I want to be your wife," she said, "but I don't want to look after your children. Send them away. Then I'll marry you."

The man looked at her. She was very beautiful.

"I can't live without this woman," he thought. "I'll hide the children. They'll be all right. Perhaps she will start to love them later."

He went home and said to his children, "Tomorrow I'm getting married again, but my new wife doesn't like children. Hide in the grain store. Don't worry. She will feed you."

So the children hid in the grain store.

The man's new wife came home with him and he said to her, "My father is dead. But his spirit lives in the grain store. My grandfather's spirit and the spirits of my ancestors live there too. They are always hungry. Please feed them for me. Give them breakfast in the morning, and lunch at midday, and supper in the evening."

The woman agreed and the man went happily off to his work.

The woman obeyed her husband. Every day in the morning, at midday and in the evening, she brought food to the grain store for her husband's ancestors. And the two children ate it.

"Please be quick," the woman said. "It's after midday. I must go and put food in the grain store for my husband's ancestors."

The woman was very angry.

"My husband tricked me!" she said. "Those stupid, lazy girls! I don't want to look after them. I hate them!"

She ran to the fire and picked up a pot of very hot water. She threw it into the grain store.

The two sisters jumped back. The water didn't touch them. It fell on a pile of chickpeas.

The little sister began to cry.

"Don't worry," said the big sister. "Look. The water fell on the chickpeas. They're soft now. We can eat them."

So that day, the children ate chickpeas for their lunch.

Their father came home in the evening. His angry wife was waiting for him.

"You tricked me!" she shouted. "I know the truth now. Your ancestors don't live in the grain store. I was feeding your daughters. I won't feed them again. Do you want me to stay with you? Then take those stupid girls away."

Her husband was very sad.

"You must choose," said his wife. "You can have me, or you can have your daughters. You can't have both."

The man looked at his wife. She was very beautiful.

Early the next morning, he woke his daughters. He took them with him into the forest. They walked all day until the girls were tired.

The girls lay down under a tree. Their father lay down between them. Soon the girls were asleep.

The man stood up and looked for a thick branch. He found one and put it between the girls.

"They'll feel it in the night," he thought. "They’ll think that I am with them."

Then he went away and returned to his wife.

In the night the girls woke up.

"What's that noise?" the little one said.

"Our clothes are made of leather," her sister said. "We'll give him pieces of our clothes."

So the two girls pulled pieces of leather from their clothes and threw them to the hyena. At last he went away.

The morning came. The children were lost.

"Father’s gone," the little one said. "What are we going to do?"

Her big sister climbed a tree.

"Let's go there," said the little one. "Perhaps the people will give us food."

The two children went to the edge of the forest. They looked at the house. A man came out of it. He was tall and ugly. His face was cruel. The children were frightened.

"He's a wizard!" the older sister said. "We must be very careful."

The two children watched and waited. The wizard went out with his cows and sheep.

"Wait here," said the older sister. "I'll go into the house and look for food."

Quickly she ran to the wizard’s house, took some food and brought it back to her sister.

"But you can't run quickly," said her big sister. "The wizard will catch you."

"I can run quickly!" the little one said. "And I'm not going to wait here alone today. I'm going to the wizard’s house with you."

At last the big sister agreed, and they ran to the wizard’s house together. The big sister came out quickly, but the little sister was too slow. She stayed in the house too long. The wizard came in and caught her. He put her in a sack and tied a rope round it. Then he pulled the sack up to the rafters of the house.

The big sister was hiding outside the house. She waited for a long time. At last the wizard came out and took his sheep and cattle away to pasture.

Then the big sister ran into the wizard’s house.

"Little sister! Where are you?" she cried.

In the evening, the wizard came home.

He hit the sack with his stick. At once the sack opened. The rocks fell out on top of the wizard and he died.

The two girls stayed in his house. They looked after the cows and the sheep and they were very happy.

Exercises for The Wicked Stepmother