The Jackal and the Rabbit 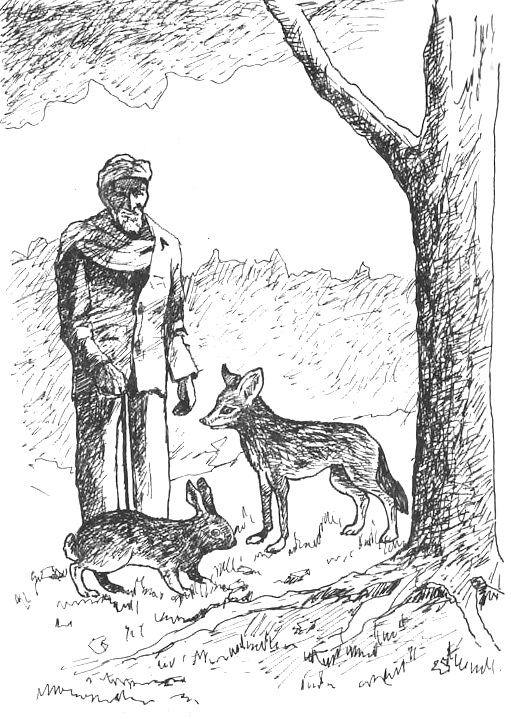 Once upon a time there was a hungry jackal. He tried to catch a bushrat, but the bushrat ran away. He tried to chase a squirrel, but the squirrel ran up a tree. Then the jackal saw a fat little mouse.

"He looks good to eat," he thought.

The mouse saw the jackal. It ran under a big rock, and jumped into its hole.

"I must dig it out of its hole," thought the jackal.

He ran under the big rock too, and began to dig. But the jackal dug too far and he dug too deep. The rock fell down on him. The jackal's paw was under it and he couldn't pull it out.

A rabbit heard him and ran up to him.

"What happened to you?" she asked.

"I was hunting a mouse," answered the jackal, "and this rock fell on my paw. Oh please, dear, kind rabbit, please help me!"

"Hm," said the rabbit. "I'd like to help you, but I'm small and weak and this rock is very big. It will be hard work for me. What will you give me if I help you?"

"Oh," cried the jackal, "I'll make a wonderful dinner for you. I'll give you all your favourite dishes. You'll eat the best food in the world."

"What reward?" said the jackal. "I can't give you a reward. I'm very hungry, and you are a nice fat little rabbit. I'm going to eat you."

"What?" said the rabbit. "But I helped you! You promised to reward me! How can you eat me now?"

"I'm a jackal and you're a rabbit," answered the jackal. "Jackals always eat rabbits. Don't argue with me."

"This isn't fair," the rabbit said. "We must find the elders and ask their advice."

So the jackal and the rabbit went to look for the elders. At last they found an old man.

"Please help us," the rabbit said. "This jackal wants to eat me. But I saved his life. I found him under a rock. The rock was on his paw and he couldn't escape. He promised to give me a wonderful dinner. So I pushed the rock off his paw. At once he forgot his promise and now he's going to eat me."

"That's not right," the old man said. "Jackal, you are ungrateful. Let the rabbit go."

The jackal opened his mouth. He showed the old man his long, sharp teeth.

"Please don't eat me," he said. "Perhaps I was wrong. Perhaps you are right after all. I can't decide yet. First I must see the rock. I must understand everything. What happened exactly?"

So the old man went back to the rock with the jackal and the rabbit.

"What were you doing?" he asked the jackal.

"I was hunting a mouse," the jackal answered. "It ran into its hole, so I was digging it out. The rock fell on to my paw."

"Which rock?" said the old man.

"This one," answered the jackal.

"And where were you?" asked the old man.

"I was here," the jackal said, and he lay down on the ground.

The old man looked at the rabbit.

"You're only a little rabbit," he said. "You’re small and weak. You couldn't move that big rock. I don't believe it."

So the rabbit pushed and pushed and the rock fell back on to the jackal's paw.

"Did you find the jackal like this?" asked the old man.

"Did the rabbit find you like this?" the old man asked the jackal.

And so the old man and the rabbit went away, and left the ungrateful jackal under the rock.

Exercises for The Jackal and the Rabbit