This story is long. There are three parts to it. Answer the questions to each part before you read on. 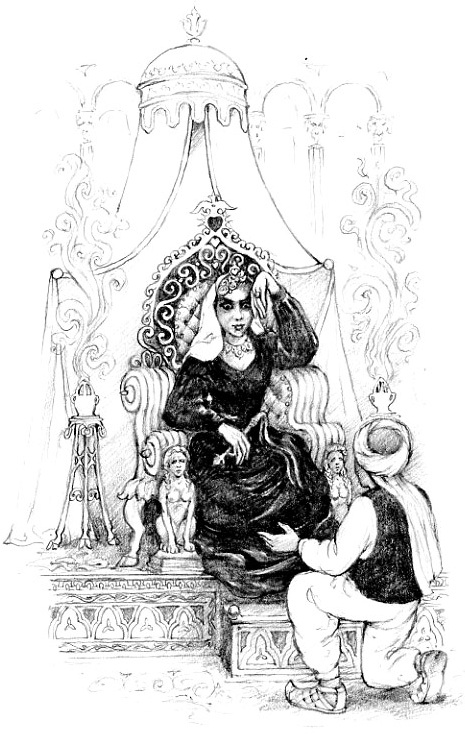 A blind king once ruled the city of Harar. He was very unhappy because he could not see. He called many doctors from different countries but none of them could help him.

One day, a fortune teller came to Harar. The king called him to the palace.

"Tell me," he said, "will I always be blind? Or will my sight come back to me? Can anyone help me?"

"Yes," said the fortune teller. "One person can help you. You have a son, a good, wise prince. Send your son to the sea. There he must find the King of the Seas, the great whale. He must catch the whale and bring him to you. Then your sight will come back to you and you will see."

The king was very happy. He called for the prince and said, "Take two soldiers with you, my son, and go to the sea. Catch the whale, the King of the Seas, and bring him to me. Then my sight will come back to me."

The prince was brave and good. He took two soldiers with him and they went down to the sea. They hunted the whale for a long, long time, and at last they caught him.

Now the whale was very big, and from his head to his tail he was covered with gold. He lay in the prince's net and looked at him.

"Why did you catch me, Prince?" he said.

"I will take you to my father," said the prince. "He is blind. Only you can help him to see."

"I can't help your father," said the whale. "And if you take me out of the water, I will die."

"Is that true? Can't you help my father?" asked the prince.

"And if I take you out of the water, you will die? Is that really true?" asked the prince.

"Then I will let you go," said the prince.

"Thank you, oh thank you," said the whale. "You have saved my life, and now I want to help you. One day, you will need me. Come down to the edge of the sea and call to me. Then I will help you."

The prince and the soldiers left the sea, and went back to the king's palace.

"And did you catch him?" asked the king.

"No, Father," said the prince. "The whale is the King of the Seas. He is too strong for me. I could not catch him."

The king was sad.

But the prince's two soldiers were greedy.

"Let's go to the king and tell him the truth," they said. "Then perhaps he will give us some money."

So the two soldiers went to the king.

"Your Majesty," they said. "The prince, your son, did not tell you the truth. We did catch the whale, but the prince was sorry for him. He let him go."

"What?" said the king. He was very angry now. "My son caught the whale, but he did not bring him to me? He is not my son, and I am not his father! Find him, and kill him! My son is now my enemy."

The two soldiers were sorry now. They liked the prince. They did not want to kill him. They went to him and said, "The king is very angry and he wants to kill you. Come with us. We will take you far away from the palace, and there we will let you go. We will come back to the king and we will tell him that you are dead."

The prince was very sad when he heard this. He did not want to die. So he went with the soldiers far away from the palace. Then they said goodbye to him and let him go.

Now the poor prince had no home and no father.

"What can I do?" he thought. "I must travel through the world alone."

Exercises for The Good Prince Part 1