Obang and his Dog 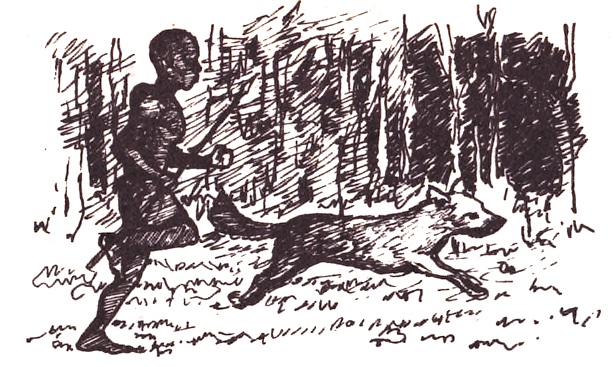 Obang had a good dog. It was clever and quick and it could run fast. It knew its master's voice. It was a good hunter and could catch wild pigs.

One day, Obang and his dog went hunting. The dog ran fast into the forest and Obang followed it. But suddenly, the dog stopped. There was a lion in front of it. The lion was eating a bushbuck.

The lion saw the dog and opened its big mouth. The dog ran quickly back to Obang, its master.

“Why did the dog run back to me?” thought Obang.

Obang went on and found the lion. The dog was behind him. It felt braver now because it was with its master. It ran up to the lion and tried to take its meat. The lion was very angry and ran after it. The dog was frightened, and it ran behind its master again.

Suddenly, he came to the edge of the Alwaro river. He jumped into the water and swam to the other side. The lion stood on the bank and watched him go. He didn't like to swim.

"My dog's a fool," he said to everyone. "It brought an angry lion to me. It nearly killed me! Where is that dog? I'm going to kill it!"

"What?" said Obang's friends. "You want to kill your dog? You can't do that. It's a good dog. It's quick and clever. It knows your voice. Perhaps, one day, you will need it."

A few weeks later, Obang went hunting again. He walked quietly along the forest path and his dog ran on in front of him.

A big python was lying under a tree. Obang didn't see it. He put his foot on the python's tail. At once, the python caught him. It climbed up Obang's legs, then it began to climb up his body.

The dog heard him. It ran back to its master, and saw the python. It went up to it and bit its tail. The dog's teeth were sharp. The python didn't like it. The dog pulled harder and harder. At last the python slipped off Obang and went into the bushes.

Obang lay on the path. He couldn't move. His dog ran round him and barked. At last, Obang sat up. He felt a bit better. He tried to stand. He was all right now.

Then Obang saw the python again. It was coming back! It wanted to catch him again! But the python was weaker now. Its tail was still bleeding. Quickly, Obang took out his knife and killed it. He made a fire and burnt the python. Soon there was nothing but ashes.

Obang and his dog went back to the village.

"You were right," Obang said to everyone. "Today I needed my dog. A big python caught me. It nearly killed me but my dog bit its tail and pulled it off me. My dog saved my life."

"Yes," they said. "A man must always be kind to his dog because a good dog is a man's best friend."

Exercises for Obang and his Dog