This is a long story in three parts. Answer the questions at the end of each part before you read the next one. Think about these questions before you begin.

Tej is an alcoholic drink made from honey. 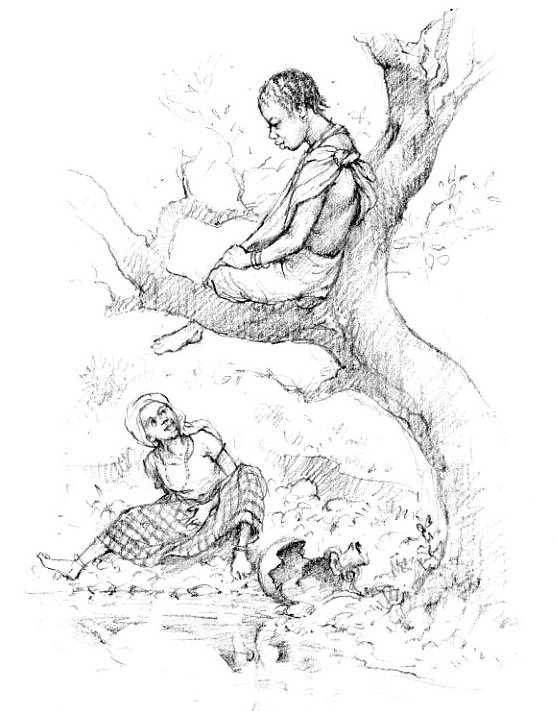 Once upon a time, there was a girl called Adiberga. She was very beautiful, and everybody loved her.

Adiberga's father was dead, and she lived with her mother and her four older brothers. She worked hard in the house. She fetched the water, cooked the food and cleaned the compound.

One day, Adiberga's mother said to her oldest son, "You are a man now. You must find a wife, and marry her."

"I don't want a wife," the oldest son said. "My sister, Adiberga, looks after me."

The next day, Adiberga's mother said, "Please, my son. Don't wait any longer. Go out and look for a wife."

A week later, his mother said to him, "Have you looked for a wife yet? Have you found a girl?"

"I have looked for a wife," her son answered, "but I have not found one. I love my sister, Adiberga, and I want to marry her. Then she will stay at home with us for ever."

"You can't marry Adiberga!" she said. "She is your sister! How can a man marry his own sister?"

Her son was angry too.

"Mother," he said. "I will never marry another woman. I want my sister, and I will have her."

He spoke to his mother every day. At first, she was angry, but then she began to listen to him.

At last she said, "Yes, my son. You can marry Adiberga. I will help you."

The oldest son was very happy. The second and third sons were happy too.

"Adiberga will stay at home with us now," they thought. "We will never lose her."

That evening, Adiberga went to the river to fetch water. Her mother and her brothers stayed in the house. Adiberga filled her pot with water and walked home. She went to the door of the hut. She wanted to go inside. But her oldest brother put his leg across the door.

"Brother," she said. "Please put your leg down. I want to come in."

Her oldest brother smiled at her.

Adiberga tried to go in again, but her second brother held his leg across the door.

Adiberga waited. Her third brother's leg was across the door now.

"What are you doing?" she said. "Please, brother. Put your leg down. Let me come in."

Now, Adiberga's mother sat beside the door. She put her leg up. Adiberga couldn’t go inside.

"Mother," she said. "Please let me come in. Please put your leg down."

"I am not your mother," her mother answered. "I’m your mother-in-law."

And she put down her leg.

Adiberga's fourth brother sat beside the door now. He was disabled. His legs were weak and he couldn’t walk. He lifted one leg with his hands.

"Brother," Adiberga said. "Why are you doing this to me? Please, let me come in."

Her fourth brother put down his leg.

The next evening, Adiberga went to the river again. When she came home, her family was together in the hut. Again, they lifted their legs against her. Again, her fourth brother let her come in.

They did this every day, week after week.

Exercises for Adiberga and her Brothers Part One