The Pot of Honey 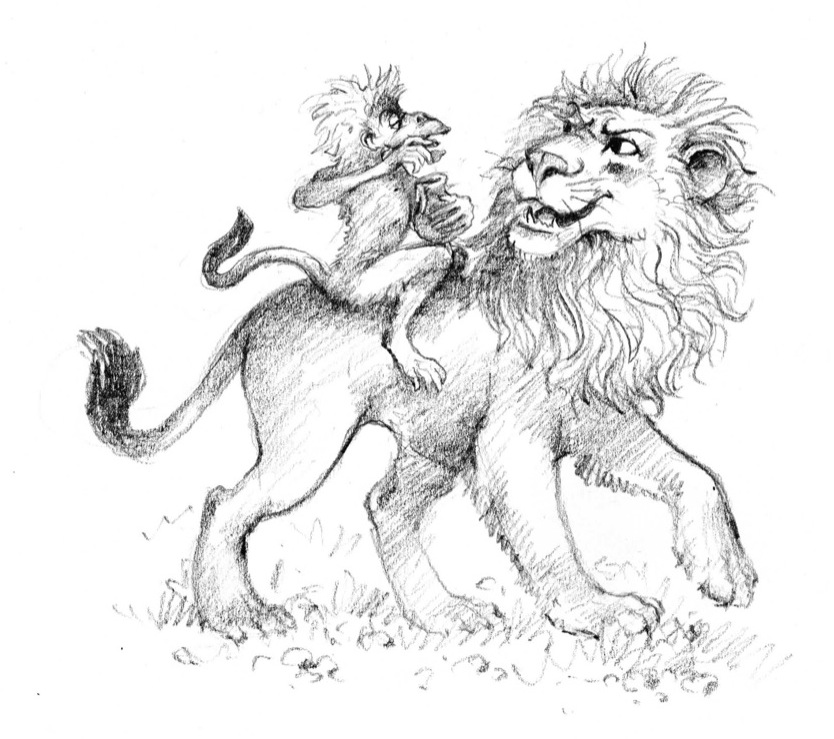 Once upon a time, a lion was going on a journey. On the way, he found a pot of honey.

"This looks good to eat," the lion thought. "I'll take it with me."

So he picked up the honey and tried to carry it.

A monkey saw him. She liked honey.

"Hello, Lion," she called out. "What are you carrying?"

"My honey," the lion answered.

"It's difficult for you," said the monkey. "You don't have any hands. I have an idea. Let me ride on your back, and give the honey to me. I will hold it for you."

The lion was happy.

And the lion opened his mouth, and showed the monkey his long teeth.

"What are you doing?" asked the lion. "Are you eating my honey?"

The monkey took her finger out of the honey. A drop fell on the lion's head. The lion stopped walking.

"Your tears? Why are you crying?" asked the lion. "Are you sad?"

"Your mother? When did she die?"

"Then don't be sad, Monkey. Don't cry. All animals must die. You and I will die one day."

And the lion walked on.

Soon, the monkey finished all the honey. The pot was empty now. The monkey was worried.

"The lion will be angry," she thought.

"Lion!" she called out. "I must go now. My relatives live near here. Take your honey!"

She jumped off the lion's back and threw the pot at him. Then she began to run away.

The lion looked at his pot. It was empty.

"You have eaten all my honey!" he roared. "Come here, you thief! I will punish you!"

The monkey jumped up into a tree. The lion jumped up too. He caught her tail in his mouth and bit it off. But he couldn't catch the monkey. She ran away from him, into the forest.

The monkey was angry with the lion now.

"My poor tail," she thought. "I have lost my beautiful tail!"

She looked down at the ground. The lion was still there. He was watching her. She jumped into another tree. The lion followed her.

"I'll catch you, you wicked monkey!" roared the lion.

"I will find you easily. You are the monkey with no tail!"

"Hmm," thought the monkey. "The lion is right. It will be easy for him to find me, because I have no tail."

She ran on, through the trees.

"I must find my family," she thought.

Soon, she came to a big group of her relatives. They were sitting in the trees, eating fruit.

"What happened to you?" they all said. "Where is your tail?"

"My tail?" the monkey said. "I cut it off. It was a long, ugly thing. It was always dirty. It's much better without a tail. Look at me. I'm beautiful now! I'm very happy without my tail."

"It's true," all the other monkeys said. "Tails are long and ugly. You are beautiful now. Cut off our tails, too."

So the monkey cut the tails off all her relatives.

Just then, they heard a roaring noise in the forest. They were frightened.

"The lion is coming," they said.

The lion came out of the trees. He stood on a hill, and he called to the monkeys.

"Monkeys! Listen to me!" he called out. "I am looking for a monkey who has no tail. Where is she? Give her to me! If you don't, I will chase you and eat you all."

"A monkey with no tail?" all the monkeys said. "But we have all cut off our tails! There are no tails here."

The lion was very angry.

"The monkey has tricked me," he thought.

"Come down from the trees," he called out to the monkeys. "I will find the one who ate my honey!"

The monkeys were frightened of the lion. They came down from the trees and sat on the ground.

The first monkey walked in front of the lion.

"Open your mouth," he said. "Vomit up the food from your stomach."

The monkey opened her mouth, and vomited up her food. There were only seeds in her stomach.

The next monkey walked in front of the lion. She vomited up her food, too. There were only fruit in her stomach.

All the monkeys walked in front of the lion. None of them had any honey in their stomachs.

At last, the first monkey stood in front of the lion.

"Vomit up your food," he said.

She vomited up her food, and the honey came out of her mouth.

The monkey was very frightened.

"No," said the lion. "You will not do it again, because now I'm going to punish you. I'm going to make a big fire and burn you in it."

He caught the monkey and carried her under his arm. He went out of the forest to a big field. There was tef straw in the field. He picked up the straw, and put it on top of the monkey.

And he went away to find fire.

At once, the monkey ran out from under the straw. There was a tree above her head. She climbed up the tree, and hid in it.

The tree was full of fruits. The monkey picked the fruits, and threw them down on to the straw. Then she sat in the tree and waited.

Soon, the lion came back. He was carrying a burning stick. He touched the straw with his stick. At once, it began to burn.

The fire grew hotter and hotter. The fruit on the straw began to cook. Suddenly, one fruit exploded with a loud noise.

"That was the monkey's eye!" the lion said. He was very happy.

"That was the monkey's other eye!" cried the lion.

"Those were the monkey's heart, and her stomach!" roared the lion.

The monkey was watching the lion from the tree. She was laughing and laughing. The lion heard her. He looked up, and saw her.

"What?" he cried. "Is that you? What are you doing there? You were in the fire! I heard your eyes and your heart and your stomach. They were exploding in the heat!"

"How did you get there?" said the lion. "I don't understand."

"It was easy," the monkey answered. "You set fire to the straw, and the smoke rose up. The smoke lifted me, and it carried me up here, into the tree."

"Is that true? I didn't know smoke could carry people," said the lion.

"You didn't know? But you are the lion, the greatest, the cleverest, the strongest of all the animals," she said. "I'm only a poor little monkey, but even I know about riding on the smoke."

"Of course I know about riding on the smoke!" roared the lion. "Do you think, you stupid monkey, that you are cleverer than me? Watch me. I'm going to ride on the smoke too. The smoke will carry me up into the tree, and then I'll catch you. And you won't run away from me again!"

So the lion jumped into the fire. But the smoke didn't carry him up into the tree. The fire burned him and he died.

The monkey was happy.

She came down from the tree, and went to find her relatives in the forest.

Exercises for The Pot of Honey