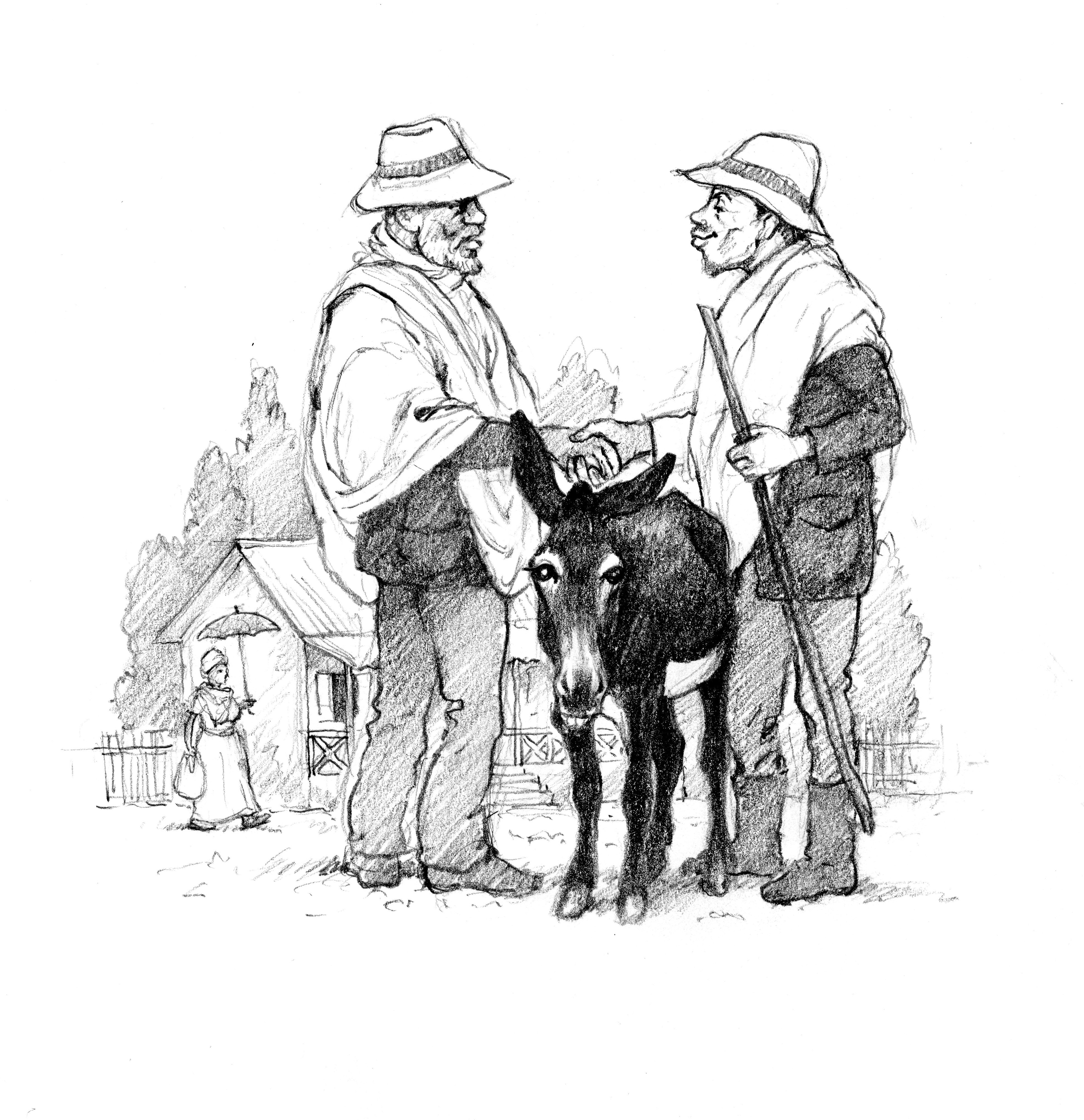 Once there were two neighbours. They were both poor, but they were friends. One day, one of them said to the other, "I must take my barley to the market today. The sack is very heavy, and the market is far away. I wish I had a donkey. But I don't have enough money to buy one."

"And I must buy some new pots in the market today," he said. "They will be very heavy. I will be tired when I come home. I wish I had a donkey, too. But a donkey is expensive. I only have half the money."

The first man had an idea.

His friend was very pleased with this idea. So that day, the two neighbours bought a donkey.

For a long time they were both happy. They used the donkey well. One week, the first neighbour took the donkey to the market. The next week, his friend took it.

"Listen," he said to his neighbour. "My dogs are hungry. They need meat. I want to kill our donkey. You can have half of it, and I will have the other half."

"What?" cried the poor man. "But I don't need any meat. I need the donkey. If you want to kill it, give me money for my half."

His neighbour was angry.

"I'm not going to give you any money," he said. "Half of the donkey is mine, and I want to have it."

"Let's go to the judge," the poor man said. "He can decide between us."

So the two neighbours went to see the judge. The judge was not a wise man. He didn't listen carefully. He didn't try to understand.

"Do you both own the donkey?" he asked.

The rich man was happy. He killed the donkey and took half of the meat. He gave it to his dogs. The poor man was unhappy.

"My poor donkey has gone," he thought, "and now I must carry everything myself."

A few months later, the rich man wanted to make a new hut for himself.

He began to carry everything out of his hut.

The poor man saw him.

"What are you doing?" he asked.

"I'm going to burn my hut and make a new one," said the rich man.

"But your hut is next to mine," the poor man said. "If you burn your hut, you will burn mine, too."

The rich man was angry.

So the rich man burned his hut. The wind carried the fire to the roof of the poor man's hut. Soon it was burning too.

"Look!" the poor man cried to the judge. "My neighbour has burned my hut! He must pay me."

It was nearly harvest time now. In the poor man's field, there was a good crop of chick-peas. The poor man worked hard in his field. He pulled out the weeds. He frightened away the birds.

One day, the rich man's sons came to visit him. They passed by the poor man's field.

"Chick-peas!" they cried. "Look, they are delicious!"

The poor man saw them from far away. He ran quickly to his field.

"What are you doing?" he said. "Where are all my chick-peas? Give them back to me."

"We can't give them back to you," they said. "We have eaten them. Ask our father. He will pay you for your chick-peas."

The poor man went to see the rich man.

"Your sons ate all my chick-peas," he said. "Give them back to me."

"I can't give them back to you," said the rich man, "but I'll give you some money to pay for them."

"I don't want your money," said the poor man. "I want my chick-peas, and I'm going to take them."

So the two men went to see the judge. The judge didn't listen to them carefully. He didn't think about their case.

The rich man was very frightened.

"But my sons will die!" he said. "Please, neighbour, let me give you money."

"I wanted money when you killed our donkey," the poor man said. "I don't want it now. I want my chick-peas."

He picked up his knife.

He began to sharpen his knife on a stone.

"No! No! Please, wait!" cried the rich man. "Let's go and see the elders. Please, my old friend, let the elders decide."

So the two neighbours went to see the elders. The elders talked for a long time. At last they called the two men to them.

"You were wrong," they said to the rich man. "You refused to pay your neighbour for your donkey. You burned his hut, and your children ate his harvest."

Then they turned to the poor man.

"But you want to kill your neighbour's sons," they said. "That is wrong too. Here is our decision. The rich man must give to the poor man half of all his property, his trees and fields, his cows and sheep. Then you can live together in peace."

So the rich man gave the poor man half of all his property. They lived together happily, and they never quarrelled again.

Exercises for The Unwise Judge