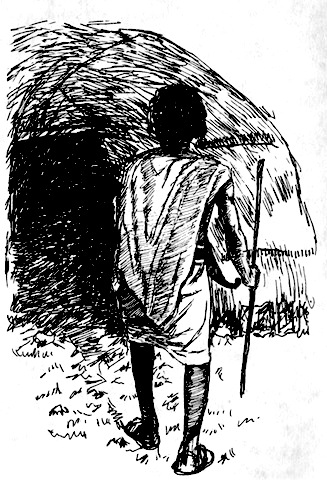 Once there was a beautiful Afari girl called Kirdali. She lived with her mother and father. The family was poor. They had no camels or donkeys. All they had was a few sheep and goats. One day, Kirdali went to the river to fetch water. But on the way home, she fell, and spilled her water.

Boreto, a rich man, was walking along the road. He heard Kirdali and went up to her.

Then he saw Kirdali's beautiful face. At once, he fell in love with her.

"She's beautiful! She's lovely!" he thought. "I want to marry her."

The next day, Boreto sent his uncle to Kirdali's father's house.

"My nephew wants to marry your daughter," Boreto's uncle said.

"What will he give me for her?" asked Kirdali's father.

"He'll give you everything he has," said the young man's uncle.

"A hundred cows, fifty camels, and many, many sheep and goats."

"He'll give me all this for my daughter?" he asked.

"Then he can take her," the old man said.

So Boreto gave Kirdali's father all his cows, his camels, his sheep and his goats. He married Kirdali and took her to his house.

But now Boreto was a poor man.

"What are we going to eat?" Kirdali said.

"Don't worry," her husband answered. "I'm a good hunter. I'll bring home something for the cooking pot every day."

So Boreto became a hunter. Every day, he went out and killed an animal. Every evening, he brought it home and Kirdali cooked it for their supper. They were very happy.

One day, Kirdali's father came to visit her.

She ran to her cooking pot.

"I must give my father something to eat," she thought.

But the cooking pot was empty.

"Boreto will soon come home," Kirdali said to herself. "He'll bring some meat. I'll get everything ready now."

She lit the fire and filled the cooking pot with water. Then she put the pot on the fire. Soon, the water was boiling. It was ready for the meat. But Boreto didn't come.

At last, she heard a noise outside. She ran out of the hut. A hunter was walking past. He had a dead bushbuck over his shoulder. But the man wasn't Boreto. It was a neighbour.

"Oh please," Kirdali said. "Can you help me? I have a guest in my house, but I haven't got any food. My husband is a hunter. He'll come home soon. Please give me a leg of your bushbuck. My husband will give you some of his meat later."

The man looked at Kirdali. He thought she was very beautiful.

"Yes," he said. "I'll give you a leg of my bushbuck. But you must come and meet me at the well tonight."

"What can I do?" Kirdali thought. "I must give my father some food."

"All right," she said. "I'll meet you at the well. But please, give me some of your meat now."

So the man cut a leg off his bushbuck and gave it to Kirdali. She ran back to her hut and put it into the cooking pot.

Soon, her husband came home. He had killed a zebra. Now there was plenty of meat. The three of them sat and ate happily together inside Boreto's hut.

It was dark now. Suddenly, Kirdali heard a noise. The stranger was outside. He was throwing a small stone on to the roof of the hut. He wanted her to come out. She looked at Boreto and at her father.

"Did you hear something?" she asked them.

"It was nothing," Boreto said.

"It was the wind," said her father.

The hunter outside threw another stone on to the roof of the hut. Kirdali didn't say anything this time. She only smiled, and gave her father another piece of meat.

The hunter threw a third stone on to the roof of the hut. Kirdali began to laugh.

"What are you laughing at ?" her father and her husband asked her.

"Three fools? What do you mean?" said her father.

"The first fool is my husband," Kirdali answered. "He gave away all his cows and camels, his sheep and goats for the love of one woman. The second fool is my father. He took everything away from his daughter's husband. Then he came to visit me. How did he expect me to feed him? The third fool is the man outside. He thinks I will meet him at the well because he gave me a leg of his bushbuck."

The hunter outside the hut heard Kirdali's words. He was afraid of her husband and he ran away. Kirdali's father was ashamed.

"You're right, my dear daughter," he said. "I made your husband a poor man. I will give him back half his animals."

Exercises for The Hunter’s Wife