Ahmed and the Clever Woman

"Hypocrites" are people who pray to God and seem very religious, but at the same time they do bad things. 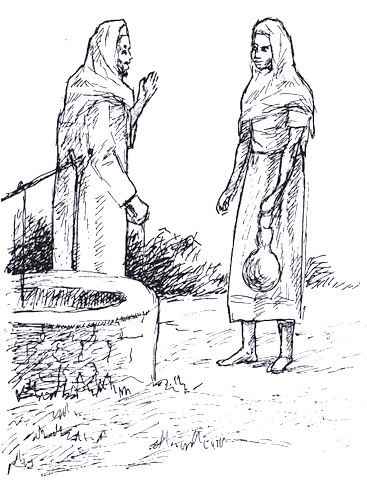 Once upon a time, there was a man called Ahmed. He worked at a well. He used to pull up water for the people.

"Yes, Ahmed is very holy. He is a sheikh," they all said.

But Ahmed was not a holy man at all. He was a trickster.

Every day, a beautiful woman came to the well to fill her water pot. Ahmed fell in love with her. But the woman was married already, and she had a son.

One day, the woman's son came to the well to fetch water for his mother. Ahmed refused to give water to the child.

"You are too small," he said. "You can't carry this big water pot. Your mother must come."

The next day, the woman came. Ahmed talked to her.

"You are so beautiful," he said. "Meet me here tonight, when it is dark."

The woman did not answer him.

"This man is in love with me," she thought. "But I love my husband. I must be careful. Ahmed is rich and powerful. I don't want him to be our enemy."

That evening, she told her husband about Ahmed.

"What shall I do?" she said. "I don't want to meet Ahmed secretly. But if I don't meet him, perhaps he will be angry. Perhaps he will quarrel with us. Then people will know about it. There will be trouble."

They talked about it for a long time, and at last they made a plan.

The next morning, the woman went back to the well. Ahmed was waiting for her.

"Oh, my darling, you are here at last!" he said. "Well? Did you think about me last night? Will you meet me here tonight?"

The woman smiled at him.

"I can't meet you here," she said. "People often come this way. Someone will see us. They will tell my husband and he will be very angry. No, I have a better plan. Today, my husband is going away to another town. He will not be at home this evening. Come to my house then, after your evening prayers."

"She loves me!" he said to himself. But then he began to think.

"I must be careful," he said to himself. "I always stay at home in the evening. I never go out. My wife will be surprised. She will ask me many questions. What can I say to her?"

At last, he had an idea. He smiled, and hurried home. He ate his supper quickly, and said his prayers.

Then he said to his wife, "I must go out this evening."

"Why?" she said. She was very surprised.

"Oh," he answered. "I met some friends today. We were talking about the Koran. There are some very difficult verses in the Koran. They want to study them tonight. They think that I am a sheikh. They want me to help them."

His wife was pleased.

"That's good," she said. "If you want to study the Koran, of course you must go."

Ahmed went to the woman's house. He was happy.

"She loves me!" he thought.

The woman opened the door for him. She was wearing a beautiful dress. Ahmed went inside. He sat down on the mat and she gave him some tea.

She went to the door and locked it. Now, the woman's husband was hiding behind the house. He was listening.

"Ah!" he thought. "She has locked the door. That's the signal for me."

He ran to the door and began to knock.

"Wife! Wife!" he called out. "Open the door! Why have you locked it? It's me, your husband. I have come home early."

Ahmed jumped up. He was frightened.

"Your husband?" he said. "This is terrible! If he finds me here, he will kill me. What shall we do?"

The woman ran to her chest and took out a dress.

"Quickly," she said. "Put on this dress. My husband will think that you are a woman."

So Ahmed put on the woman's dress, and the woman opened the door. 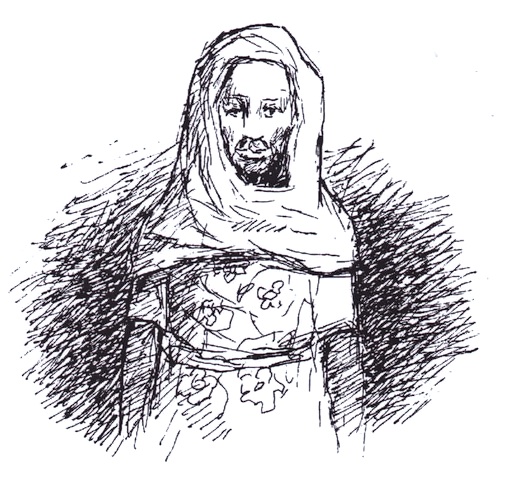 Ahmed was frightened. He pulled his scarf over his face. The woman's husband came in. He carried a sack of maize in his arms.

"What happened?" his wife said. "Why have you come home early?"

"I wanted to travel with some friends," her husband said, "but they didn't go today. They are going tomorrow. But I brought you this sack of maize."

Then he saw Ahmed.

"Oh, that's lucky," he said. "Has this girl come to help you? She can pound the maize. There is a lot of it. It's too much for you. Bring your mortar and pestle. She can pound it now."

So the woman brought her mortar and pestle and Ahmed began to pound the maize.

"Why doesn't this stupid husband go away?" he thought. "Why has he brought so much maize?"

At last, he finished pounding all the maize. The woman's husband gave him some money.

Ahmed ran out of the house, and back to his home. His wife was waiting for him.

"Husband!" she cried. "What's happened? Why are you wearing a woman's dress?"

"Ah," he said. "Well. I was discussing the Koran with my friends."

"In a woman's dress?" asked his wife. She was shocked.

"Yes," said Ahmed. "You see, we were talking about some very difficult verses."

"What verses?" asked his wife.

"They were about Satan, the Evil One," Ahmed said. "Oh, my dear wife, it was terrible! We were sitting quietly, talking about Satan. Suddenly, he came to us!"

"Yes. He began to beat us all with a big stick. But I was lucky. I saw this dress on the mat near me. Quickly, I put it on. Satan beat all my friends, but he didn't want to beat a woman. It was too shameful, even for him. So I escaped and ran away."

"That was very clever," said his wife. "You are a wonderful man, husband. You know all the verses in the Koran, and you can even escape from Satan!"

The next day, Ahmed went to the well again. He began to pull up the water. Soon, the woman came. She smiled at him.

"Listen," she said. "We had bad luck last night. But come to my house this evening. My husband is going away. His friends came for him this morning."

"Oh no," he said. "I'm not coming to your house again. I don't want to pound maize all night. If I want to pound some maize, I can do it at home!"

The woman went home and told her husband everything. They laughed and laughed.

"Our plan was a good one," they said. "Ahmed will not trouble us again. But he has not become our enemy."

Exercises for Ahmed and the Clever Woman