Wak and the Raven 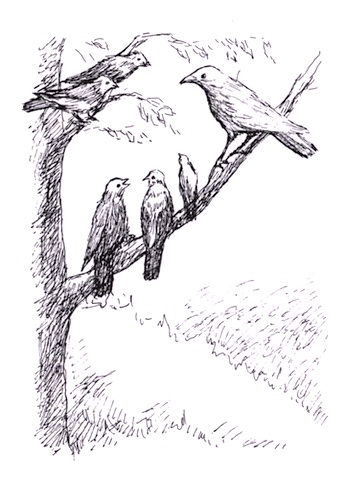 Once upon a time, there was a Sun God. His name was Wak. The Raven was Wak's messenger. He used to fly from the earth to the sky and from the sky to the earth with messages in his beak. In those days, the Raven was a great sheikh. He was all white, and there was not a black feather on him.

At last, they called a meeting.

"We must share our food between us," they said, "or there will never be peace. We need a judge to help us. Let's ask our sheikh, the Raven. He can tell us what to do."

The Raven listened carefully to all the other birds.

"I will ask our master, Wak, the Sun God," he said, and he flew up into the sky.

The other birds waited for the Raven for a long time. At last, he flew back to them.

"But who is a big bird? Am I big?" asked the partridge.

"And who is a small bird? Am I small?" asked the parrot.

The Raven thought for a moment.

"And you?" a little bird called out. "What will you eat, Raven?"

"Oh," he said, "I am in the middle, not big, not small. Also, I am your sheikh and the messenger of Wak. I can eat meat and fruit, and anything I like."

The other birds were angry.

"You have cheated us!" they said.

They tried to catch the Raven, but he flew away from them. He went up, up into the sky, to find his master, Wak.

On he flew, closer and closer to the sun. The heat burned his feathers, and they became black. Now there was not a white feather on him.

From that day, the Raven's feathers have always been black, and he still calls out, "Wak! Wak! Help me!"

Exercises for Wak and the Raven