The Longest Pole in the World 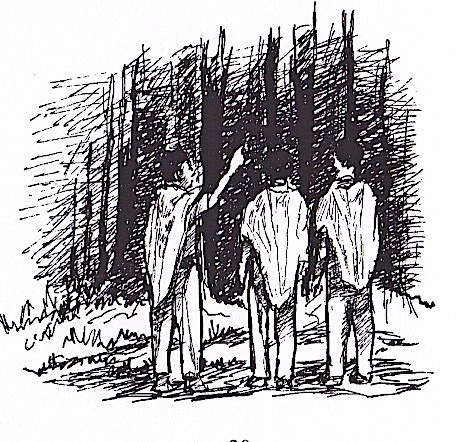 A long time ago, the Mattoni people lived in Kafa. They were wise and clever, and they gave good advice to the Kafa kings. There were Manno people in Kafa too. They were tanners. They made leather from the skins of cows. They were very poor.

One day, the old king died, and his son became the king. He did not like his father's Mattoni advisers.

"These people are too clever," he thought. "I don't trust them. Why did my father always listen to them? They are rich and powerful now. Perhaps, one day, they will kill me and a Mattoni will become the king."

"Now I am safe," thought the king. "All my enemies are far away."

But the soldiers did not send all the Mattoni people out of the country. One little boy ran away and hid in the forest.

A kind Manno family found him there. They took him home, and looked after him.

One day, the king said to his servants, "The kings of other countries have big, beautiful palaces. I want a palace too, but my palace must be bigger and more beautiful than theirs."

The servants were afraid of the king.

"You will need a very long pole," his servants said. "This pole will make the pillar in the middle of the palace. The pole must come from the tallest tree in the world."

His servants were worried.

The king was angry.

The king's servants were frightened. They left their homes and began to travel through the forest. They were looking for the tallest tree in the world.

For ten years, the king's servants looked for the tree. They found many tall ones, but none of them reached the sky. They were old men now. Their beards were long. Their hair was long. The nails on their fingers were very long. They went on, and on. They were looking for the tree.

"We can't go home to our families without the pole for the king's palace," they thought, "or the king will kill us."

"Who are those people?" they asked each other. "Look at their beards, and their long hair. What do they want from us?"

The people ran away. But one young man didn't run away. He went up to the king's servants and spoke to them. It was the Mattoni boy. He was a man now.

"Are you looking for something?" the Mattoni boy asked them. "What is it? What do you want?"

The king's servants looked at the young man. His clothes were old and dirty.

The young man didn't go away.

So the king's servants told the Mattoni boy everything.

"We left our homes more than ten years ago," they said at last. "We will never see our families again. We can't find the king's pole. If we go home, he will kill us."

"But you can go home tomorrow," he said. "The king will not hurt you."

"What do you mean?" the king's servants asked him. "How can we go home?"

"I will tell you," the Mattoni boy said. "Take a drum, and sing and dance. Go to the king's palace. Say to him, 'O King, live for a thousand years! We have got your pole.' He will say, 'Is it the tallest pole in the world? Is it as high as the sky?' Then you must say, 'We don't know. We haven't got a measuring rod. Give us the longest measuring rod in the world. We will take it to the pole, and measure it. If it is the tallest pole in the world, we will bring it back to you.' The king will say, 'But I haven't got the longest measuring rod in the world.' And you will say, 'Then we are sorry, Your Majesty. We cannot bring the pole to you.'"

The king's servants were very happy.

"Oh thank you, thank you," they said to the boy. "Now we can go home to our families."

"That's good," said the boy. "But please don't tell the king about me. Promise me that."

The king's servants promised, then they fetched a drum. They began to sing and dance. They ran all the way to the palace.

The king heard the noise.

He went out to meet them.

"O King!" his servants said. "Live for a thousand years! We have got the pole for your palace."

The king was happy.

"But I haven't got the longest measuring rod in the world," said the king.

"Then we are sorry, Your Majesty," his servants said. "We can't bring the pole to you."

The king was angry.

"This is a trick," he said. "You didn't think of this answer. You met someone clever in the forest. Who was it? Is there a Mattoni in the forest?"

His servants remembered their promise.

"We didn't meet anyone, Your Majesty," they said. "We told you. We need the tallest measuring…."

So the men told the king about the boy in the forest.

"Send my soldiers to find him," he said to them. "They must bring him here to me."

Soon the soldiers came back. The Mattoni boy was with them.

"Who are you?" said the king. "Your clothes are old and dirty. You are making leather, and you are not a Manno. Your face is not a Manno face. Your voice is not the voice of the Manno."

The boy looked at the king. He was not frightened.

"O King, live for a thousand years!" he said. "I am a Mattoni. When I was a child, your soldiers came to my home. They took my father and my mother away. I ran out of the house. I hid in the forest. The Manno people were kind to me. For many years, I lived with them."

The king was ashamed.

So the Mattoni boy lived with the king, and became his advisor. The king sent for his relatives, and they returned to their old homes. And after that, the Mattoni people always lived in Kafa, and they were always advisers to the king.

Exercises for The Longest Pole in the World