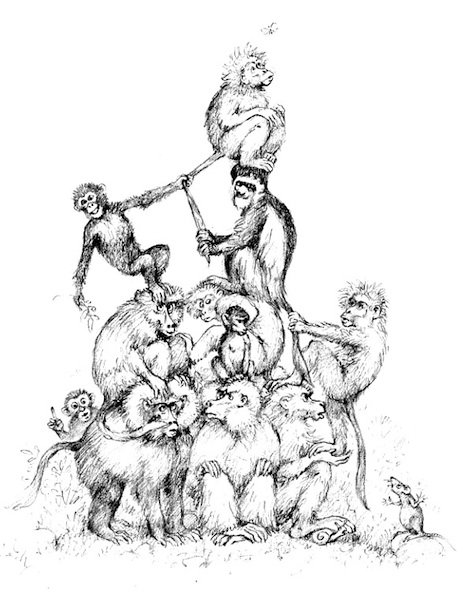 In the old days, the baboons and the monkeys were the same. Their faces and hands and colour were all the same. Only one thing was different. The baboons were bigger than the monkeys.

The baboons and the monkeys were friends. They lived together, and ate the same food. They played, and talked, and slept together.

One day, an old monkey said, "Listen, my brothers. Why do we live here, on the ground? Look up at the sky. Isn't it beautiful? Why don't we go up to the sky? Perhaps we will find another country there."

The others laughed at him.

"A tower? How can we do that?" asked the other monkeys and baboons.

"We can do it with our bodies," the old monkey said. "There are many of us. We can climb on to each other, and sit on each other's shoulders. We will soon reach the sky."

"The baboons are bigger than the monkeys," said the old monkey, "so they must go at the bottom of the tower."

And so the baboons began to make a tower. They climbed on each other's shoulders, one by one. There were many baboons, and soon the tower was high.

"It's your turn now," they said to the monkeys. "Climb up on us. We'll soon reach the sky."

The biggest baboon was at the bottom of the pile. A naughty little monkey was looking at him.

"That big baboon chases me sometimes," he thought. "But he can't move now. I'm going to punish him!"

And he pushed his finger into the big baboon's bottom.

He began to jump around. At once, all the other baboons fell down to the ground. They were very angry.

"You wicked monkeys!" they said. "We'll punish you for this!"

The monkeys were very frightened. They ran into the forest. The baboons ran after them.

"Oh God," the monkeys prayed. "The baboons are going to kill us! What can we do? Please, God, help us!"

"Don't be frightened," he said to them. "I will change you. The baboons will not know you now."

He gave the monkeys white hair above their eyes.

"Who are these animals?" they said. "They are not monkeys. Where have the monkeys gone?"

The monkeys were happy.

"Now the baboons don't know us," they thought, "but we know them. We can run away from them now and they can't catch us."

"The monkeys are frightened of the baboons," he thought, "but fear is a bad thing. I will change the baboons too. Then the monkeys will not know them, and they will not fear them. They will not be together any more, but they will live in peace."

Exercises for The Monkey's Tower