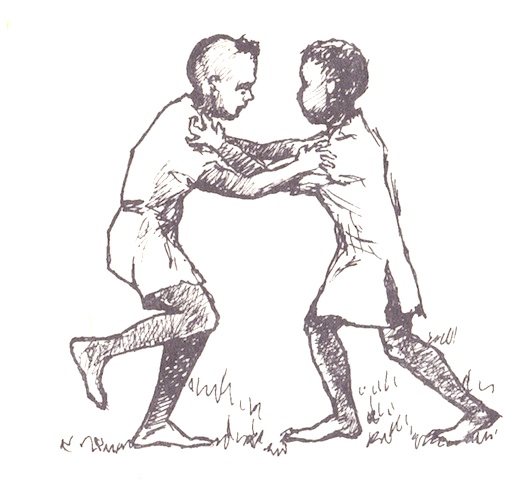 One day, a woman threw a bone out of her house. Two dogs started fighting for it. A wise old man called Robele Megerra saw them.

"Stop those dogs!" he called out. "If you don't, the boys will start fighting too."

A few minutes later, a boy came up the path. The big dog was fighting with his little dog. He ran up and began to beat the big dog with a stick. At the same time, another boy was coming home from school. He saw the boy with the stick. He was hitting his big dog.

"What are you doing?" he shouted. "Stop hitting my dog!"

Soon the two boys were fighting.

"Stop those boys!" called out Robele Megerra. "If you don't, their mothers will start fighting too."

Just then, a woman came out of her hut.

"Why is that boy hitting my son?" she said, and she ran up to the boys and tried to stop the fight.

Then another woman came out of her hut.

"What are you doing?" she shouted to the first woman. "Stop hitting my son!"

Soon the two women were fighting.

"Stop those women!" called out Robele Megerra. "If you don't, their husbands will start fighting too."

Just then, a man was coming home from the fields.

"Why is that woman hitting my wife?" he said, and he ran up to the women and tried to stop the fight.

Another man was driving his cattle home for the night.

"What are you doing?" he shouted to the first man. "Stop hitting my wife!"

Soon the two men were fighting.

"Stop those men!" cried Robele Megerra. "If you don't, their clans will start fighting too."

Everyone heard the noise of the fight. They ran up and looked. Soon, all the men from the two clans were fighting each other. The fighting was very bad.

At last the battle ended. Sixteen men were dead, eight from one clan and eight from the other. Everyone was very sad.

They went to see the elders. The elders discussed the matter for a long time.

At last they said, "You must pay for every dead man with the life of another man."

"But if we do that," everyone said, "we'll kill another sixteen men."

"Then you must pay a hundred cows for each dead man," the elders said.

"But if we do that," the people said, "we will lose one thousand six hundred cows. Then we will have nothing."

A crazy old man was passing the elders' meeting.

"What's the matter? What are you talking about?" he asked them. They told him all about it, and he listened carefully.

At last he said, "If you kill sixteen more men, everyone will be very sad. And if you give away all your cows, you will all be very poor. I know the answer to your problem."

"Tell us, tell us!" everyone said.

"Each clan must take its silver necklace," the old man said, "and throw it into the river. Throw away your hatred with the necklaces, and forgive each other."

So the people took the necklaces of their clans and threw them into the river. They forgave each other, and they never fought again.

Exercises for The Dog Fight