Sometimes people ask questions that you don't want to answer. Their questions make you feel small or stupid. 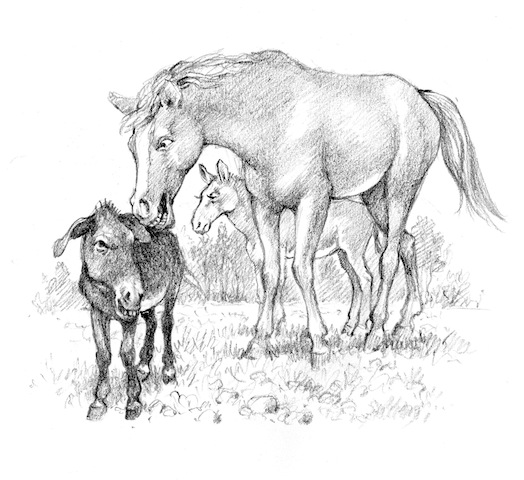 Once upon a time, there was a young mule called Wardit. She was clever, and beautiful, but she was very proud.

One day, Wardit went to the river to drink some water.

On the road, she met a handsome young horse.

"Wardit is the most beautiful mule in the world!" thought the horse."I must marry her."

He ran up to Wardit.

"I am fine, thank God," she answered.

"Where are you going?"

"I'm going to the river to drink some water," Wardit said.

"Then let me come with you," said the horse.

"Oh Wardit, you are the most beautiful mule in the world. Let me stay with you! Let me marry you! Please, be my wife!"

Wardit looked at the horse. He was young, and handsome, and strong. "I will marry him," she thought.

"Who are your parents?" the horse asked her. "Who is your father? Who is your mother?"

Wardit turned her head away. She didn't want to answer him.

"Tell me, my dear," the horse said. "Who is your father? I must know the family of my bride."

Wardit laughed. "Oh," she said. "You can see my mother every day. She lives in the palace, and the governor rides her every morning."

"And my sister," Wardit said, "belongs to the priest. Don't you know her? He rides her to the church."

"And my aunt," cried Wardit, "oh, my aunt is so beautiful! She lives with the headman of the village, and he loves her like his daughter."

"That's very good," the horse said, "but please, dear Wardit, tell me about your father. I want to know about him."

Just then, a poor old donkey came down the road. It was Wardit's father. She looked at him, and she was ashamed.

"My father is only a donkey," she thought, "but the horse is young and handsome. He will not want this poor old animal to be his father-in-law."

"Wardit!" the old donkey said to his daughter. "What are you doing here?"

The horse was angry now. "Who is this foolish old donkey?" he said. "Why is he speaking to you, my beautiful bride?"

But the horse wasn't listening. "Go away!" he shouted to Wardit's father. "You foolish old donkey. Leave us alone!"

Exercises for Wardit the Mule