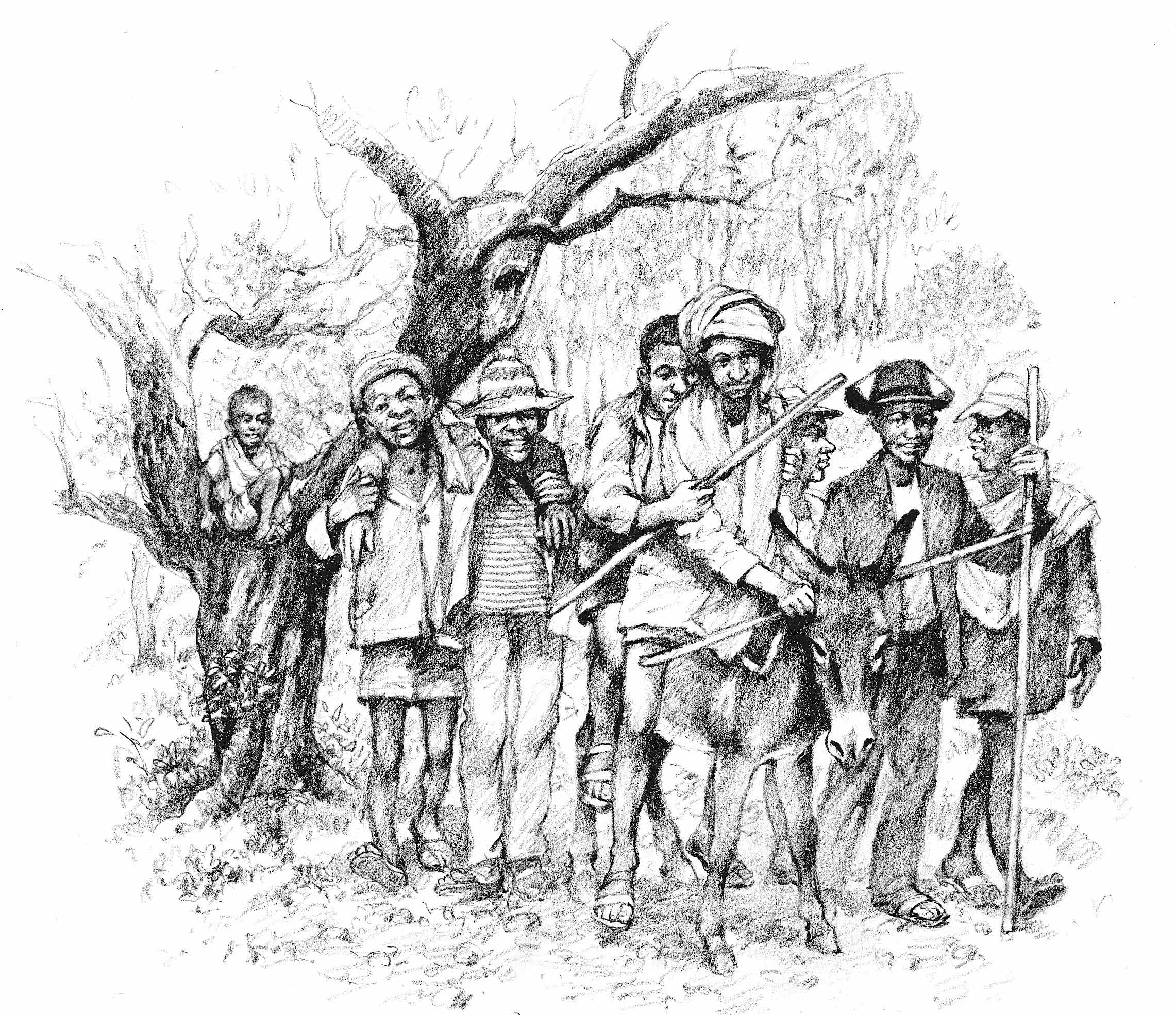 Once upon a time, a man and a woman had seven foolish sons. They lost their father's cattle, they broke his plough, and everyone cheated them at the market.

Their mother prayed to God.

"Oh God," she said. "Why did you send me all these foolish children? Please, I pray you, send me one more son, and let him be wise."

God heard the woman's prayer, and she gave birth to another boy. The child was very small. He was only as long as his father's hand.

Sinziro was small, but he was very clever, and his mother and father loved him very much.

His brothers were jealous.

"Why do our parents love you?" they said to Sinziro. "Look at yourself! You are no bigger than a rat."

An enemy lived not far away from the family's house. One day, Sinziro's brothers said to each other, "We are hungry, but our enemy has many fat cows and bulls. Let's go to his compound tonight and steal two of his bulls. We'll take our father's donkey. It can carry the meat home."

They didn't see Sinziro. He was sitting behind his father's stool.

So, that night, Sinziro's brothers took the donkey and went to their enemy's compound.

They didn't see Sinziro. He was running after them.

When they reached the compound, the gate was shut. The brothers couldn't get inside.

"I wish Sinziro were here,” said one of the brothers. "He's clever. He could get into this compound."

"But Sinziro is at home, with our mother and father," another brother said.

They didn't see Sinziro. He was hiding behind a stone.

"I'm not at home, brothers. I'm here," he said. "And I know what to do. Stay here. I'll go inside the compound, and open the door. I'll drive the bulls out to you."

"But how can you go into the compound?" the third brother said. "The door is locked."

His brothers looked. There was a small hole in the fence beside the door. It was only big enough for a cat, but it was big enough for Sinziro. He ran through it easily. He climbed up to the door and opened it. Then he began to drive two fat bulls out of the compound.

The brothers' enemy was asleep in his house, but his dogs were awake. They heard Sinziro, and they began to bark. Their master woke up too. He ran out of his house.

"Who’s there, in my compound?" he called out. "Who is stealing my cattle?"

Sinziro pretended to be the man's servant.

"Don't worry, sir," he called out. "Our two big bulls were lost, but I found them. I am bringing them back to you now."

The owner was angry.

"Don't make so much noise," he said. "We are trying to sleep in this house."

He went back into his house, and shut the door.

Quietly, Sinziro drove the two bulls out of the compound. His brothers were very happy.

"What beautiful fat bulls!" they said. "They will be very good to eat. Let's kill them and eat them now."

"No, no!" said Sinziro. "Our enemy will hear us. He will come out again and catch us. Come on, brothers. We must take the bulls far away, across the river."

So Sinziro and his brothers drove the bulls far away from the enemy's house. At last they came to the river. The seven foolish brothers looked at the water, and shook their heads.

"We can't cross this river," they said to each other. "Perhaps it's deep. We can't swim. Where is Sinziro? He will know how to cross it."

Sinziro was sitting on one of the bulls' horns.

His brothers gave him a rope. Sinziro tied one end of the rope to the tree. Then he swam across the river, and tied the other end to another tree. He called out to his brothers, "Hold the rope, and walk across the river. You will be quite safe."

So, one by one, his brothers held the rope and crossed the river, while the bulls swam in front of them.

"We are far away from our enemy now," said Sinziro. "We can kill the bulls."

The brothers killed the bulls. They cut them up and divided the meat into seven parts. They took one part each.

"Your share?" they said. "But you are too small. You can't eat this meat. No, Sinziro. There’s no meat for you."

"I'll punish my brothers for this," he thought.

"If you won't give me any meat," he said to them, "at least give me the bladder of one of the bulls."

"A bladder? No one wants to eat that," they said, and they threw it to Sinziro.

Sinziro took the bladder, and ran up a tree. He blew into it and tied up the hole. Now the bladder was like a ball. Sinziro took a stick from the tree, and he began to beat the bladder.

"Oh!" he began to shout. "Stop it! Please, don't beat me, sir! I didn't steal your bulls. It was my brothers. Look, there they are, near the river. They have killed your bulls and cut up the meat!"

The brothers were very frightened.

"Our enemy has followed us," they cried. "He will punish us!"

At once, they ran away.

Sinziro came down from the tree. He was smiling.

"Now all the meat is for me," he said, and he put it on the donkey, and took it home.

Exercises for Sinziro and his Brothers