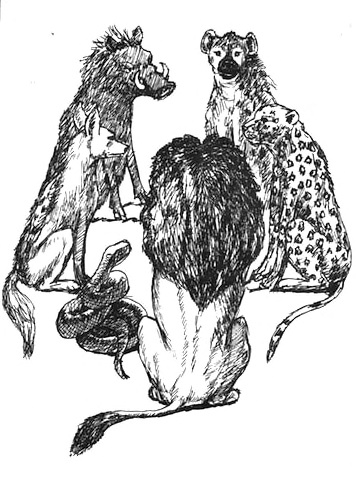 Many big, strong animals lived in the forest. There was the leopard, the hyena, the warthog, the lion and the snake. And there was also the fox.

One day, all the animals went hunting together. They hunted well, and killed some camels. Then they sat down, ready to eat the meat.

But the fox said, "Wait, my brothers. We're all good friends now. But friends sometimes begin to fight over their food. Tell me, lion, and you, leopard, and you, snake. What makes you angry? We need to know. Then we can be careful. We won't make each other angry."

"We agree, we agree," said the snake, the hyena and the warthog.

And the lion opened his big red mouth and roared.

"I'll remember that," the fox said. "Now, hyena, it's your turn. What makes you angry?"

"Oh," he said. "You know me. I'm a nice, kind animal. I never fight with my friends. And I'm very strong. My head's strong, my back's strong and my legs are strong. But I have one weak place. My stomach is weak. So don't kick me in my stomach. Do you understand, all of you? Never, never kick me in the stomach!"

And the hyena showed the animals his long white teeth.

"Thank you, hyena," said the fox. "I'll remember that. What about you, leopard? What makes you angry?"

"Oh," said the warthog, "nothing frightens me. And I'm never angry."

"Sometimes I start running," the warthog said. "I run and run. I can't stop! Yesterday, I was running very fast. Someone ran after me and spoke in my ear. I didn't like it. I hated it! It made me very frightened."

All the animals moved back. They didn't want to tread on the snake.

"Wait a minute," the lion said. "What about you, fox? What makes you angry?"

"Well," the fox answered. "I'm small and I'm not very strong, but I'm not a child, and I'm not a servant. Be friendly to me. Be fair to me. Then I'll be friendly and fair to you."

All the animals ran to the camels and began to eat. But the lion, the leopard, the hyena, the warthog and the snake were quick and strong. They pushed the fox out of their way. They all ate and ate, but the fox couldn't reach the camels. He was still hungry.

He lay down and went to sleep.

And he shut his eyes and went to sleep.

The fox ran up to the leopard.

"Look," he said. "The hyena's asleep. Why don't you kick him in the stomach?"

"What?" said the leopard. "Are you crazy? He hates it! Don't you remember? 'Never kick me in the stomach,' he said."

"You're a big, strong leopard," said the fox. "Are you frightened of the hyena? You're not brave at all! You're a coward! A stupid, weak coward! But I'm not frightened. Watch me."

And the fox ran up to the hyena and kicked him in the stomach. Then he ran behind the leopard.

The hyena woke up at once. He jumped up and saw the leopard.

"Why did you do that?" he shouted, and he frowned into the leopard's face.

The leopard didn't like that, so he hit the hyena. The hyena hit him back. They began to fight.

"I'll kill you for this!" the hyena shouted.

The lion was sleeping behind the leopard and the hyena jumped on top of him. The lion woke up.

He saw the hyena and the leopard. At once he jumped up and killed them both.

He started to lie down again, but he put his foot on the snake. At once, the snake bit him.

And he bit off the head of the snake.

And he began to run and run.

The fox chased after him.

The warthog was very frightened. He ran up a big mountain and fell off it and died.

"The other animals were strong," he thought, "but I'm clever. I'm very, very clever."

And he smiled, and lay down, and went to sleep.

Exercises for The Clever Fox